A little-known staging anomaly took place on Apollo 15 (AS-510). When I read about it in the AS-510 launch report I nearly fell out of my seat and recently while watching news video of the launch I saw another piece of the puzzle. The following is an excerpt from my book, “Growing up with Spaceflight-Apollo Part Two” concerning the launch anomaly plus a lot of details not included in the book, especially that final piece of the puzzle; the secondary plume!


“Boosting Apollo 15 was a Saturn V quite a bit different from the vehicle that had boosted Apollo 14. Nearly all of the changes in the launch vehicle monikered as AS-510, had been made to save weight and add payload capability. Most apparent from the external perspective was the absence of the four ullage motors that had previously been located at 90 degree intervals around the skirt that attached the S-IC first stage to the S-II second stage.
“Those four solid propellant rocket motors were designed to fire .5 seconds after shutdown of the first stage as triggered by the Saturn V’s Instrument Unit (IU). Then .2 seconds later the IU commanded the firing of the shaped charges that would separate the first and second stages. The Ullage motors would continue to burn for a total of about 3.87 seconds producing about 22,900 pounds of thrust each. The objective of the motors was to apply a continued acceleration to the S-II stage and thus seat the fuel and oxidizer in the bottoms of their tanks. Data from past flights indicated that those four Ullage motors were not needed, so they were deleted from all future Saturn V launch vehicles beginning with AS-510. Internally, the S-II stage had another ullage system change when fixed orifices replaced its ullage pressure regulators. 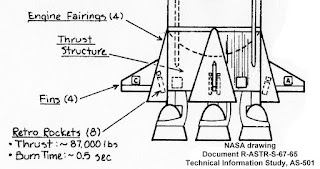 “Meanwhile, down on the huge S-IC first stage, four of the eight solid-fuel retro rockets were deleted. The retro rockets aided the separation of the stages by countering any residual impulse from the spooling down of the F-1 engines and helped to counter the stage’s inertia. Data indicated that four retro rockets could do the job as easily as eight. Additionally the F-1 engines were “reorificed” beginning with AS-510 bringing the Saturn V’s total thrust up from 7.5 million pounds to 7.68 million pounds. All of these changes, although sounding somewhat large, only increased AS-510’s payload capability by 1,410 pounds, but 400 of those extra pounds allowed the Lunar Rover to ride to the Moon.
“At 136 seconds into first stage burn, the IU commanded the center engine on AS-510 to shut down. Then, 22.56 seconds later the IU commanded the outboard engines to shut down and the staging sequence to begin. It was at this point that the concept of eliminating four of the eight S-IC retro rockets and those four ullage motors nearly bit NASA in the butt. The problem began with the “shutdown” of those new up-rated F-1 engines.
“For those of you reading who are not familiar with turbine engines (and engineers reading please excuse me for simplifying), when you shut down a high-speed turbine, you do not just stop it suddenly. Doing so would cause the turbine’s own inertia to rip itself apart and it would explode like a fragmentation bomb- sending chunks of shrapnel flying in all directions at very high velocity. The F-1 engine had at its heart ultra high-speed turbines pumping fuel and oxidizer. In order to safely shut it down, the ignition source was removed and it was allowed to “tail-off” or spool down to an eventual stop while LOX and RP-1 continued for a time to flow through it. That outflow was still at a fairly high rate and caused some residual impulse.
“In the case of AS-510 the engine tail-off of the outboards lasted longer and was of a greater residual impulse than experienced from analysis of the previous version of the F-1 by 10.8 %. To compound the problem the elimination of the four ullage motors on the interstage skirt subtracted 91,600 pounds of S-II stage posigrade thrust as well. Normally, with an eight retro rocket and four ullage motor staging, the S-IC and the S-II stages would be slightly over 100 feet apart by the time the five J-2 engines in the S-II came up to full thrust.
“Predicted separation with just four retro rockets and no ullage motors was just short of 70 feet. In reality the separation distance of the two stages on AS-510 at full S-II thrust was just short of 40 feet! 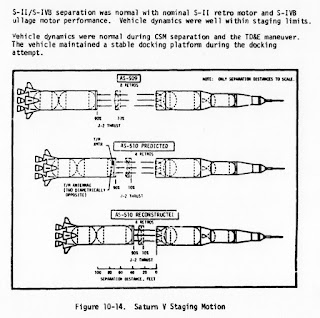 “In fact when the plume of the S-II engines contacted the S-IC it was so powerful that it knocked out the telemetry being transmitted from the departing stage. The Radio Frequency (RF) signal continued, but the antenna gain was muted. Such RF signals without gain would indicate that the cable bundles had been blown away, or that the RF canister itself had been damaged or blown away. This loss had no impact on the mission since the S-IC had already been jettisoned. 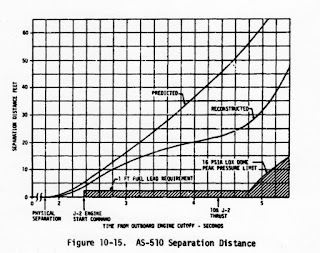 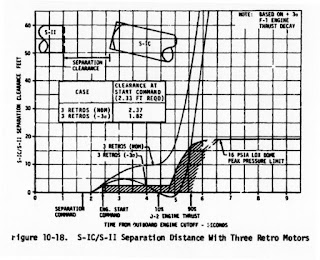 “The real alarm was sounded after the mission at MSFC when it was calculated that if one of the four S-IC retro rockets had failed to ignite the two stages could have re-contacted during the staging sequence. That would have resulted in a catastrophic failure of the S-II and a mission abort using the escape tower. It was immediately decided that the four retro rockets that had been deleted from the S-IC would be reinstated for the next mission; Apollo 16.”
Now- here is the part that I could not put into the “Growing up with Spaceflight- Apollo Part Two” book, because there is no NASA documentation to prove it, there is only my own comparison of TV video.
So violent was the close proximity ignition of the five J-2 engines of the S-II stage that not only did it wipe out the telemetry RF units but it also ruptured the LOX tank dome on the S-IC stage. This is clearly seen in the staging footage as a secondary plume erupts from the S-IC that is not seen on any other Saturn V staging. In order to prove this I watched the staging videos from all of the Saturn V stagings where the event can be seen (Apollos 9, 12 and Skylab 1 were obscured by weather and Apollo 17 was a night launch so no plume was visible) and none have the brief secondary plume.
At staging there was 31,135 pounds of residual LOX in the tank, under pressure. At that point the S-IC was ~72Km or 44 miles in altitude and well outside of most of the earth’s atmosphere. The release of 31,135 pounds of LOX could easily account for the secondary plume seen in the video. That would mean that the upper LOX tank dome was compromised by the staging event.
Presented here is a side-by-side of the Apollo 14 staging sequence and the Apollo 15 sequence. The images are matched frame-by frame so you can see the difference.

That said, the crew was not really in any danger. The departing LOX, as seen in the ground and flight tests for SA-2 and 3, simply turned to ice crystals instantaneously. It could not burn or explode, because there was no fuel to combust. Instead what it did was to expel outward and very rapidly down the side of the S-IC and away from the departing S-II and Apollo spacecraft. Although the close proximity of the staging did wake up the engineers when the post-flight data was reviewed, in aviation we have a saying about vehicles moving too close to one another: “As long as you don’t get into those negative inches, there’s no problem.”

If you liked this- there is plenty more in the book series... so BUY my books! Seriously, I need the money to get my dog otta the pound and I have a tooth that needs a root canal.

Check out the e-book versions HERE