Saturn I: made from 1 Jupiter and 8 Redstones... right? 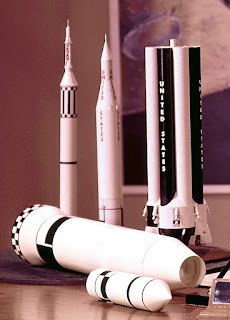 Looks like it could be in these models...
until you know the details

Well… no. The Saturn I first stage was NOT made from one Jupiter and eight Redstones- that's a popularly held misconception.

This myth comes up often on spaceflight social media and implies that the folks at ABMA (the Army Ballistic Missile Agency, which first developed the Saturn vehicles) went into the hangar, nabbed 8 Redstone boosters and one Jupiter booster and just strapped them together to make the Saturn I. This is nonsense- so I’ll kill the myth quick and then explain.

First off we’re talking about “tanks” which in the IRBMs actually made up about 2/3 of the vehicle’s length. The overall length consisted of the tanks plus the engine compartment, plus an instrument section, plus a nosecone and or war head. Since the Saturn I didn’t have a war head and it’s instrument section was carried above the tanks which were stacked atop the engine compartment- our discussion is one of simply the tank sections. 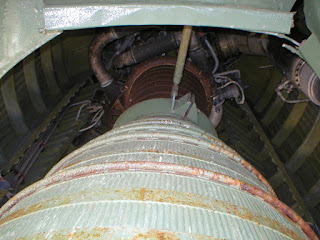 This is the view up the Thrust Unit of a Jupiter.
It's a long way from the bottom of the hull
to the base of the tank.

The Redstone itself, in the IRBM configuration, which would have been used in the era in question had a tank section that was only 37.5 feet long. The Jupiter IRBM had a tank section was just 29.7 feet long- almost half as long as the Saturn I core tank.

The S-I stage’s tanks were not stock Redstones or Jupiters. 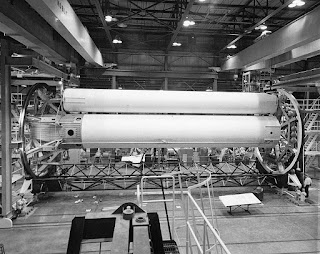 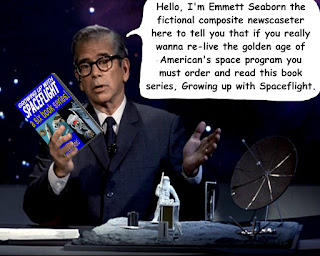 Growing up with Spaceflight
Get on e-book HERE

Of course ABMA (which on July 1, 1960, was taken over by NASA as the Marshall Space Flight Center, or MSFC) and NASA itself added to the confusion by repeatedly stating that the S-I stage was made up of “eight Redstone tanks and one Jupiter tank.” This over-simplification was intended to promote understanding, yet is highly misleading and thus led to this popular myth. It was also a public relations tool to add a note of confidence to the booster. This was because of the outstanding reliability and launch record of both the Redstone and the Jupiter. After all, if it was made up of these trusted machines, the S-I must also be just as reliable… right? This was started at a time when critics at the Cape were referring to the Saturn’s clustered engine concept as “cluster’s last stand” so NASA and MSFC needed every shred of good publicity about the project that they could get. Oddly, NASA's public affairs office continued to say that the S-IB stage was made from Redstone and Jupiter rockets right into the Skylab program. By that time, most people in the public did not even know what a Jupiter IRBM was and the Redstone had been a museum piece for more than a decade. 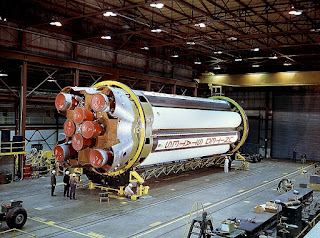 How the Saturn I actually got constructed was that the ABMA people used the same construction jigs, tooling, methods and man-power used to make the Redstone and Jupiter tanks to build the longer Saturn I tanks. These tanks had the same diameter and wall thickness as those of the IRBMs, but had NOTHING else in common. 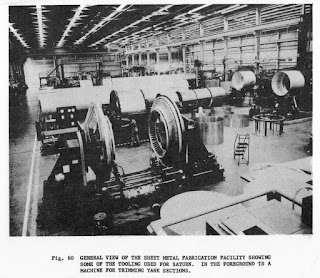 By using the same construction jigs, tooling, methods and talent as had been used on the IRBMs, the ABMA benefitted in the form of time-saving and quality control. The bulkheads and tank domes used in the IRBMs were never in the Saturn I tanks, nor were any other fitting as each tank was custom-made specifically for the Saturn. The main bodies of the tanks were constructed by rolling plates of aluminum into "C" frames each of which was ~5.12 feet long. Those were spot-welded together two at a time to make a ring. Those rings, with stringers added were stacked to form the cylinder that would be most of the tank. The tank domes were formed in a process called hydro-spinning. 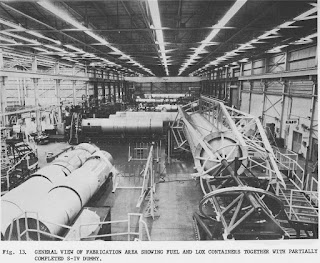 The only thing that the Saturn tanks had in common with the IRBMs was their diameter. The core LOX tank for all Saturn I and IB boosters were 105 inches in diameter and all eight tanks surrounding it were 70 inches in diameter. That size never differed and did actually match the diameters of the Redstone and Jupiter IRBMs. 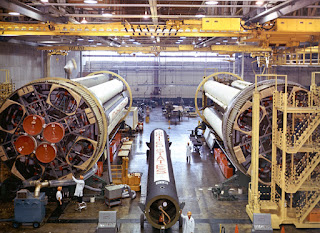 On the Saturn I, Block II the tanks were lengthened to 62.47 feet for the outer eight tanks and 65.8 feet for the core tank. This led to the stage being able to carry ~100,000 pounds more propellants and thus make a longer burn time. 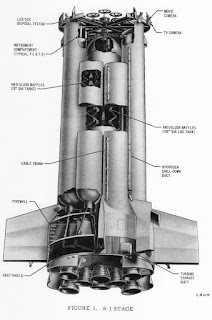 So ends the myth. 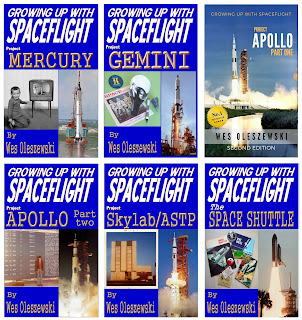 Posted by Wes Oleszewski at 6:18 AM No comments: