This blog entry begins with an excerpt from my book, "Apollo Part One" and following that I'm going to give some perspective, so stay tuned. 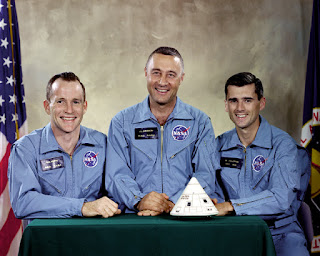 Up in the great state of Michigan we were totally unaware of the fever pitch at which the work on Apollo was progressing at Cape Canaveral and at other NASA centers around the country. In fact, on Thursday, January 26th, 1967 we were getting our first taste of a massive blizzard. After local weather broadcasters predicted, “a good amount of snow” we got plenty more than that. My Dad had driven the family car to the railroad depot in Flint about 30 miles south of our house. He was working as a railroad engineer on the “third trick” night shift at the at the Buick Fisher Body plant. This meant that he had spent all night running a switch engine in snow that began to come down far more heavily than predicted. By the end of his shift on Friday morning, the roads were impassable and the snow was coming down even harder. 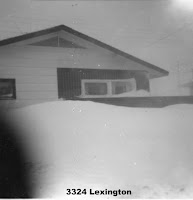 Dad called home to see if we were all okay and to tell Mom that he was stranded. She was a bit scared- considering that this was the worst snow storm in a half century and she was home with three kids ages 9, 7 and 3. Dad immediately told her that he would get home- somehow. 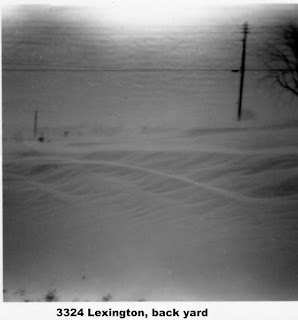 Of course we three kids were delighted. The schools were all closed and we watched with endless fascination as the snow blew and drifted. Eventually the drifts got so high that I could stand on a stool, crank open the bedroom window and touch the top of a drift that was right there at window level five and one half feet above the ground. Nothing moved and no one ventured outside all day on Friday the 27th, except for my Dad. The C&O line that he worked for had a freight train that came through Flint from Toledo, Ohio and ran up to Saginaw every morning. Dad hopped aboard the engine on that train and rode it up to the town of Bridgeport. There, the train passed within 100 yards of my paternal Grandma’s house. Dad had them stop there, he hopped off and hiked over the fence and through the drifts to Grandma’s house. She provided him with some warm dry clothes and hot coffee and then he set out, on foot, for our Sheridan Park home a mile and a half away. He had called from Grandma’s house to tell us he was on the way and all three of us kids kept watch out the back windows. After what seemed like hours, he came trudging along the Grand Trunk Railroad tracks behind our house and through the blizzard to our back door. We all cheered as if Santa had arrived; now we would all be snowed-in together. 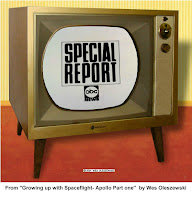 That evening, as the snow piled up some folks gathered around a warm fireplace. On our side of town, however, almost no one had a fireplace and at our house we all gathered around a warm TV set. It was late in the evening and almost bedtime, we were watching ABC’s local channel 12, and my most favorite show, aside from “Batman” of course, “The Time Tunnel.” Suddenly the program was interrupted by an ABC News “Special Report.” There on the screen in glorious black and white was ABC’s “Science Reporter” Jules Bergman. Hardly looking into the camera Bergman began to read from some papers in his hands. His voice was shaking and cracked at least once- I thought he was actually going to cry, but as I listened to his words I knew why. Most of what I got from what he was reporting was that the three astronauts of the Apollo 1 mission, Gus Grissom, Ed White and Roger Chaffee, had just been killed by a fire on the launch pad at Cape Canaveral. I really did not soak in much more than that. My Mom put her hand over her mouth and gasped and my Dad said nothing. You always knew that something was really bad when my Dad went silent. Before a moment seemed to pass the news bulletin was over and the “Time Tunnel” returned. 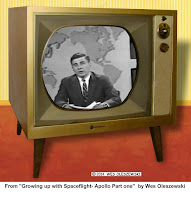 Mom put us all to bed that evening but there was too much blizzard going on for me to sleep. I spent a protracted time looking out my bedroom window and watching the snow blow past under the street light. What kept running through my mind was that the astronauts had been killed in a fire at the pad.

“At the pad, how could that happen?” I wondered. “Were they down in the place under the rocket and someone accidentally started the engines?” my nine-year-old brain pondered, “How could NASA let that happen? Didn’t they have their spacesuits on? Aren’t astronauts indestructible?”

I kept picturing three astronauts in spacesuits walking down in the flame trench and then somehow the rocket engines just lit up and incinerated them. It was an awful thought for a kid with a very vivid imagination; almost as awful as the actual event on Pad 34."

Of course there is much more to the story, and you'll have to read the book to find out the rest.
NOW... the blog part...

As a space buff and spaceflight historian I find that the end of January each year is simply the worst. Not because of the three U.S. manned spaceflight tragedies that took place at that time of the year, but because of the social media ratcheting up of grief over those events. Sure, we all should remember those who were lost, but let us leave it as that. Launch Complex 34, for example is treated like a grave site. It is NOT a grave site where anyone should go to weep. In fact it is a historic landmark where three astronauts were killed in an accident, but it is also the place where huge steps forward in the peaceful exploration of space took place. Certainly, in the middle of that the Apollo 1 fire also took place and three astronauts were killed. Yet we need to keep that within the total context of the history of the site.

On May 5, of 1961 Alan Shepard launched into space on a Redstone booster from the Cape and on July 21 of that same year Gus Grissom also boosted from LC-5, just 8,330 yards from where he would lose his life less than six years later. Americans were thrilled by these two flights which were boasted in the media as being a great leap in our space race with the Soviets. The Soviets, however, were quick to point out that their R-7 boosters were so much more powerful than the Redstone they made the two American space launched look like, "...a flea's jump..." 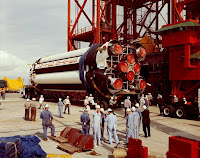 Soviet propaganda was right, yet was ignoring an American operation that was taking place right out in the open. On the same day that Alan Shepard's Freedom 7 was launched, the SA-1, S-I first stage was in the test stand at MSFC being test fired for the second time. That firing of 44.17 seconds duration produced far more power than the Soviet R-7. Some three weeks after Grissom's Liberty Bell 7 flight, that first Saturn I booster arrived at Cape Canaveral's Launch Complex 34 and was erected on the launch pedestal. It would shake the world on October 27, 1961 when it successfully launched as the world's most powerful booster. 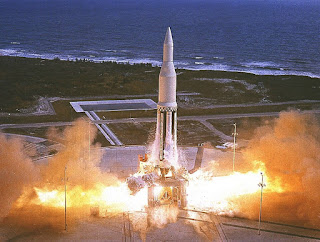 Three more Saturn I vehicles would fly from Complex 34. The Soviets would never catch up in successful listing capability. 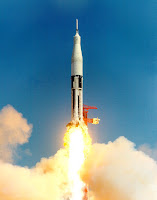 After the tragic Apollo 1 fire, AS-204 would be de-stacked and later used for the un-manned Apollo 5 flight that tested the Lunar Module in Earth orbit and AS-205 would be stacked at Complex 34. Notice here, that NASA did not shut down the complex after the fire and forever mark it as a grave site. Instead they did what is always done in flight test after a failure. They pressed ahead and tested the more than 800 changes to the Apollo CSM. 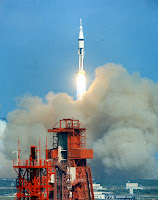 Apollo 7 made history as it lifted off from Complex 34. It was the first manned flight of an Apollo spacecraft, it was the first manned flight of a Saturn launch vehicle, it saw the implementation of scores of new flight crew and pad crew safety features that would be carried forward to today. It was also the last manned launch from the Cape Canaveral Air Force Station up to this writing on January 27, 2020.

Thus, I'm not saying do not remember the Apollo 1 crew, what I am saying is as you do so also remember all of the huge leaps forward in spaceflight history that also took place at Complex 34. When you visit that site, indeed take some time to remember the crew. Then take some more time and walk around the cement base of the pad and look at the names and dates that were scrolled into the freshly poured concrete. Those men were not making a grave site, they were building a place where history would be made. Remember them as well. 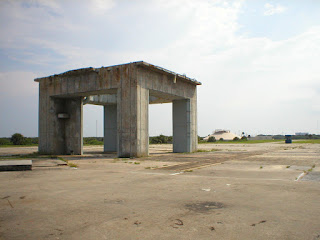 Some of you reading this may think I'm crass or dismissive. No, I'm a historian and I witnessed the above stated history and the three spaceflight tragedies on TV and in person, some of which took place before some of you were even born. History, in spite of social media, must be kept in perspective. If you think that's wrong or dismissive, I'd ask why it is that you do not venture out into the desert and visit the site where Mike Adams' X-15 hit the ground killing him on November 15, 1967, less than a year after the Apollo 1 fire. He was an astronaut too. Post flight data showed that he had indeed crossed the threshold into space on that flight, and he was awarded astronaut wings after his death. 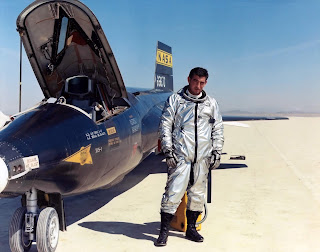 History has to be kept in perspective.

You can also get it in e-book form
HERE


Posted by Wes Oleszewski at 10:30 AM No comments: