Apollo 7... A HALF CENTURY AGO

The following is an excerpt from the "Apollo Part One" volume of "Growing up with Spaceflight" and looks closely at one of the more overshadowed events in the Apollo series; the launch of Apollo 7. On October 11, 1968- exactly a half century prior to this writing, NASA launched the mission that would lift the United States space program from the ashes of the Apollo 1 fire and place the nation back on the path to the Moon.


The fact that between January 27th, 1967 and October 11th, 1968 North American Aviation and NASA were able to completely correct and clean up not only the design of the Apollo Command Module, its systems and the mountain of record keeping and changes in procedures to the point where they had a fine spacecraft is astounding. In its day, the Apollo CM was the most complex flying machine ever created. After the fire it had to be completely transformed from the death trap that had killed astronauts Grissom, White and Chaffee to the amazing vehicle that future astronauts would trust with their lives. 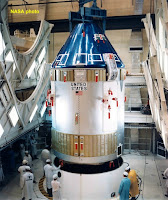 APOLLO 7:
SHADOW OF THE APOLLO 1 FIRE
At two hours and 25 minutes before launch the crew was inserted into the Apollo 7 CSM. Schirra was the first one in through the hatch followed by Cunningham who would be in the far right couch and finally Eisele was strapped into the center couch. The countdown proceeded until the T-6:15 mark when an unplanned hold was called. The S-IVB’s J-2 engine chamber had not reached the proper chill-down temperature and an additional two minutes and 45 seconds was needed to attain that limit. 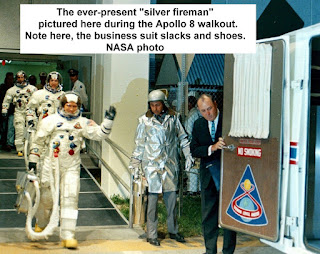 At T-3.35 seconds the ignition sequence of the booster’s eight H-1 engines began and at T-0.19 seconds the hold-downs began to release and the first manned Saturn IB achieved “first motion.” The vehicle’s Instrument Unit (IU) signaled that its umbilical had disconnected at 0.00 in the count which indicated actual liftoff and Apollo 7 was on its way. Launched on an azimuth of 100 degrees east of north, AS-205’s IU commanded a roll maneuver to a programmed 72 degrees at 9.95 seconds into the flight and at that exact same moment it commanded a pitch maneuver to start the vehicle tilting downrange. Just 28.15 seconds later the roll maneuver was completed and Apollo 7 was on its way.

At 74.15 seconds into the flight the AS-205 vehicle entered the area of maximum aerodynamic pressure on the vehicle (Max-Q). It was near this point that some of the maximum aerodynamic heating began on the vehicle as well. In order to shield the Command Module (CM) from this heating as well as from the heat of the Launch Escape System (LES) if it were needed, a Boost Protective Cover (BPC) was fitted over the CM. There was a small oval-shaped window in the cover in front of Schirra’s rendezvous window and a second small round porthole-like window over the hatch window that were built into the BPC. Other than that, the windows were all covered. As the vehicle approached Max-Q the noise and vibration impressed upon the crew reached its peak. Shortly after that time Schirra noticed a streamer of white smoke running down his window between the BPC and the CM. Something in there was burning itself away outside of the CM. Considering that this mission was being launched in the shadow of the Apollo 1 fire, that little streamer of smoke got Schirra’s attention in a big way. Ever-cool, Schirra said nothing as he simply watched the streamer. In a few seconds Apollo 7 was through Max-Q and the streamer rapidly faded away as did the earth’s atmosphere.

Four of the S-IB first stage engines cut off at 140.64 seconds into the boost and 3.68 seconds later the remaining four engines were cut off from their igniters. Exactly 1.26 seconds later the IU commanded separation of the two stages as the four S-IB retro rockets ignited in unison with the S-IVB’s three ullage motors. Just 1.39 seconds after separation of the S-IB from the S-IVB the IU commanded the second stages’ J-2 engine to start and 8.96 seconds later the LES with its BPC attached was jettisoned. From there Apollo 7 finished its boost phase exactly 616.75 seconds after liftoff. About 40 minutes later Schirra told his fellow crewmen about the streamer of smoke that he had witnessed outside of his window, their reaction was recorded as, “Huh!”

In 2008 I was attending NARAM at The Plains, VA selling model rocket kits. Also in attendance was Apollo 7 LMP Walt Cunningham. He was there signing copies of the CDs that made up the audio version of his book "All American Boys" (which is one of the best astronaut books yet written). I went over and bought a copy and had him sign it. Then I handed him one of my Dr. Zooch Saturn IBs. Holding it, he admired the model of the rocket he had once flown upon. Then he looked over at his wife and sighed, "This was a great rocket." Of course he didn't mean my model, but rather AS-205, the launch vehicle that had put him into space. Capitalizing on the moment I asked if he would sign my rocket. Without hesitation he did exactly that. 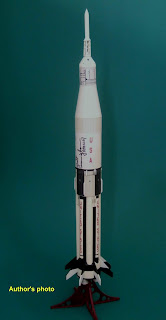 This past July (2018) I was attending Spacefest it Tuscon. While going to breakfast solo I was given a four top table and an iced tea. As I went up to order my omelet, in walked Walt Cunningham and his wife. I overheard them asking the host about a table and decided that this was my big chance! Stepping over I said to the host, "Please put them at my table." Walt's wife asked me, "Are you sure?" and I pointed to my table and said, "Absolutely, please sit at my table." Which they did. When they were out of ear shot I whispered to the host, "The bill is mine." When I got back to my seat I told the Cunninghams that their breakfast would be my treat."  They politely accepted. We sat and had the best conversation... not about space, but about writing books.

For a life long space-buff this was my ultimate "YES!" moment. Something I could never have imagined doing as a kid or as an adult. It didn't make my my day, or my week, or my month... it made my YEAR! The Cunninghams are the finest of people.