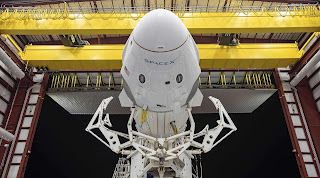 Recently I’ve seen a lot of social media banter about if or not the Inspiration 4 crew should be called “astronauts.” Perhaps we need a new name for these sorts of people- such as… (fill in the moronic suggestions here)

Astronaut; noun: One who flies in space, space venturer.

These four individuals climbed atop a rocket that was just nine feet shorter than an Apollo Saturn IB and launched with 1.71 million pounds of thrust, which was just over 100,000 pound greater than the Saturn IB, and flew to an orbital altitude higher than any humans had flown since Apollo 17- which took place just 14 months shy of a half century ago. And then the Inspiration 4 crew returned safely by splashing down in the Atlantic off Cape Canaveral. They were the first all-rookie crew to orbit the Earth since Skylab 4 launched on November 16th, 1973.

If that isn’t space venturing, I don’t know what is.

I’ve been watching spaceflight since Freedom 7 and this WAS a space mission accomplished by people who have earned the title of “Astronaut.”

For those who quip about billionaire and who paid for what, let’s take a look at this mission’s Pilot In Command; Jared Isaacman. Aside from being a highly successful businessman, he is also a highly skilled pilot. He flies right wing for the Black Diamonds jet flight demonstration team and broke the world record for circumnavigating the globe in an aircraft. Plus, he holds a degree from the Embry-Riddle Aeronautical University. Frankly, as a retired professional pilot, I’d be confident sitting next to him in any flying machine, any time- including a spacecraft.

All of these crewmembers trained for this mission and none of them just walked aboard because they simply had a ticket.

These people launched from sea level, orbited the Earth higher than anyone in a half century and returned to sea level. They all four are astronauts and to argue that point, is completely missing the point

Posted by Wes Oleszewski at 7:58 PM No comments:

This is Private spaceflight

There are times when I just have to say, “I warned you!” That especially applies to the zealots of “All Commercial, private spaceflight.” 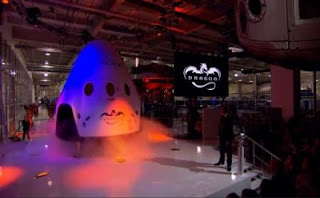 Many years ago when Elon Musk first implanted the concept that private companies could do spaceflight better, and cheaper than NASA, the social media sites lit up. Between the “Down with NASA” crowd and the “NewSpace” mob there were endless usernames and newborn arm-chair experts who were delighted to take out their surfboards and ride this wave of all-private spaceflight. It’s here, it’s new, it’s really cool! Who needs NASA, Elon can do it all. “When the Falcon 9 Heavy comes out, it’ll replace all of the heavy boosters.” “NASA is finished.” Were some of the common quips.

Early on I stepped into this rapid current of all commercial spaceflight zeal and added a single note of critical thinking.

Be careful what you wish for.

All-private spaceflight is exactly that… PRIVATE.

They can do whatever they want and unlike NASA, which is paid for with U.S. tax money, the commercial carriers don’t have to show spit to anyone, especially the zealots who cheered them on. We’re so used to NASA’s onboard public broadcasts from space that we have a whole generation of space fans who think that’s the way it has to be done. Now, the first “All commercial” space mission, monikered “Inspiration 4” just gave the NASA haters and private spaceflight fans a good dose of the word, “private” while also fizzling the word “inspiration.”

Upon reaching orbit, the mission- which had a five hour live TV buildup, was blacked out.

Other than a tweet or two saying everything was great, about 9 minutes of recorded video and a few photos dumped onto Facebook, there was pretty much nothing from the crew. Suddenly the questions began… is there a widespread case of space adaptation syndrome going around the crew? What’s going on?

One clue may be that the pay-per-view Netflix service, which was said to be an affiliate of the mission, and which will be selling subscriptions, for those not already in their pocket, to allow viewing of the entire mission after splashdown, may have something in hand here. Unlike NASA, SpaceX owns every single thing that goes on during this mission- including the inspiration. And it is simply good commercial business for them to sell it to those who will best feed the company’s bottom line. A global network of paid in-home, or on the net subscribers would fit nicely. But… nawww say the SpaceX zealots… Elon would never do that.

Why do you think that SpaceX has bought a strip of Texas beach to build their own launch site? So they can avoid range delays- sure. But also, so they can slam the gates and keep out whoever they want. Private spaceflight is exactly that… it’s private. I was a corporate pilot, and our flights were private. Even when people asked who was aboard or who owned the jet, we simply said that information was private. Sure you can stand a mile away and watch the ramp with binoculars and maybe catch the time that we depart, but that’s about it. The fact that your favorite rock star or movie star is aboard, and where they’re going is all up to you to guess. Likewise, the day is coming when rockets will depart from Texas and all of you commercial space buffs who didn’t pay to get inside the gate will have to stand miles away with your binoculars and watch from a distance while guessing about what’s really going on.

Burt Rutan stood at the Oshkosh airshow two decades ago and walloped government spaceflight. Exalting the purpose of private spaceflight he half shouted into a microphone to a crowd of his fans, “…NASA is screwing you!” His was the concept of private spaceflight for everyone… yep, everyone. Early this year, we saw the product of his vision as Sir Richard Branson opened the doors to space with a Rutan vehicle, that only billionaires can afford to ride. Looks to me, like Rutan is screwing you. Now here comes Elon and SpaceX and private orbital spaceflight… blacked out to the public until after the mission is over- sort of the way the old Soviets did it. But, unlike the Soviets, you can subscribe to Netflix, and see it post mission. Gee… how inspirational. At least NASA let us see things live… because we’d already paid for it in tax dollars.

You wanted non-government spaceflight and now you’ve got it.

Be careful what you wish for… you just may get it.

Posted by Wes Oleszewski at 7:22 PM No comments: 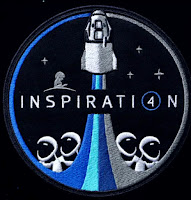 SpaceX’s latest mission “Inspiration 4” had an amazingly successful launch on Sept. 15th, 2021. Sending history’s first all non-governmental crew into orbit. It was the ultimate in corporate flying and was dedicated to benefit Saint Jude Hospital- a beyond worthy cause. As a former corporate pilot, this one warmed my heart. As a spaceflight historian I was keen to see some of the historic landmarks involved. The first pure non-government crew, the first crew to fly higher into space than any mission since Apollo 17, the youngest person, age 29, to fly in space who was also the first person in space with a medical prosthetic.

I watched the launch itself on SpaceflightNow and took in the more than four hours worth of coverage. I have to say that SpaceX has taken launch coverage of human spaceflight to a level that has not been seen in a half century. In fact, it took us space buffs into points of view that we never dreamed of in the olden days. Their HD cameras and remote drone views following the crew caravan around KSC are amazing. Plus, the videos of the personal stories of the crew members, two of whom are alumni of the Embry-Riddle Aeronautical University from which I proudly wear a class ring, were so well done they should be given an award.

About the only draw-back to the launch coverage was the constant noise and clatter in the background as the hosts were apparently seated, as always, just outside the company cafeteria in Hawthorne. Additionally, I guess SpaceX management likes the cheerleading crowd boisterously celebrating every milestone in the event. Yet that was tiresome and unprofessional nearly a decade ago. We get it… your employees are excited and happy, but at times their shouting on cue drowns out the engineering calls from launch control. This is spaceflight- not a college pep rally.

Also, the hosts really need to brush up on their spaceflight history. During the entire length of the crew insertion process, one of the hosts repeatedly stated that the crew would be making a final phone call from the phone at the level of the crew access arm, “…which has been a tradition since the Apollo days…” NO! The Apollo crews were unable to use a telephone through their bubble helmets. For crying out loud- just look at the photos from those missions. The crews were sealed into their suits and oxygenated long before arriving at the LUT. Taking off the helmets to make a phone call would have negated that entire process. It’s one thing to make a slip of history while doing a live broadcast, it’s another to keep repeating the bad history over and over. No astronaut that flew aboard an Apollo command module ever made a phone call from the LUT or anywhere else once their helmet was secured. 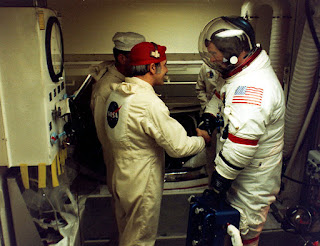 Of course, what do I know… I only wrote three books on the subject.

Posted by Wes Oleszewski at 9:26 AM No comments: