WHY DID THE SKYLAB SATURN IBs HAVE WHITE TANKS?

Here’s another question that often comes up on spaceflight social media. Why were the Saturn IB first stage tanks on the Skylab (and ASTP) missions painted all white instead of the usual black and white? Considering all of shots in the dark that people who think they can answer this question post, I guess it’s time for the correct answer.

To be factually correct, the RP-1 fuel tanks on those vehicles were not painted all white specifically “for Skylab.” In fact the first Saturn IB with all white tanks, AS-206 was stacked on Pad 37B on or about January 22, 1967 and was intended for use as the booster for the first unmanned lunar module Earth orbital flight. When that mission was handed over to AS-204, the booster intended for Apollo 1, and the Apollo schedule was reduced due to the Apollo 1 fire, AS-206 was placed in long term storage. It was later brought out to boost Skylab 2.

So, why the all white tanks? You may ask. 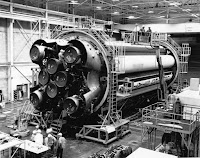 Beginning with the very first Saturn I tanks, those constructed for S-I-D, the dynamic test stage, the S-I stage’s RP-1 fuel tanks were painted black on the outward facing surfaces and zinc chromate on the inward surface. That stage had its birth on March 7, 1961 at MSFC. The black area had a vertical white strip in which the red lettered words “UNITED STATES” were monikered. The black tanks were painted as such for visual and photographic tracking purposes.

for more on Skylab/ASTP try my book
You can get your e-book version HERE!

As the Saturn I program began to roll, plans were advanced to build and fly the “up-rated Saturn” which later became the Saturn IB. At that time the plan was to fly a huge amount of Saturn IBs. In fact on December 5th, 1966 the schedule for ONLY the Apollo Applications Program (which later became Skylab) called for 15 Saturn V launches and 22 Saturn IB launches! (Ref; Skylab: A Chronology, p. 100)

That didn’t include any of the hardware needed for the Apollo lunar program. The folks building the tanks had to get moving on the production line.

Thus, having seen this coming, the production of Saturn IB tanks was already in high gear. In fact the tanks and other components for the S-IB-5 stage was started on January 8, 1965, more than a year before the very first Saturn IB, AS-201 was launched on February 26th, 1966.

On April 19th, 1965 the AS-201 stage had just completed static firing in the test stand when ripples in the black fuel tank, F-3, were noticed. Later consideration determined that the heat of the sun on the tanks was causing the distortion. The answer to the problem was just to paint those tanks white from then on- which would better reflect the sun’s heat. It was too late to alter the tanks for the S-IB stages that had already been produced, S-IBs 1 through 5, (S-IB-5 became AS-205 and boosted Apollo 7) but work on the construction of the tanks for S-IB-6 (which became AS-206 and boosted Skylab 2) and the others that would follow had not yet begun.

So, when construction of the tanks for S-IB-6 began in October of 1965, all of the tanks were painted white. As it worked out, S-IB-6 would, by default alone, become the booster for Skylab 2 after being in long term storage since 1967. It would show off the all white S-IB tanks for the very first time. Likewise all of the following Saturn IB vehicles had all white tanks.

Now, once again, you have the facts. Please do not bother arguing with people on social media… just send them here. 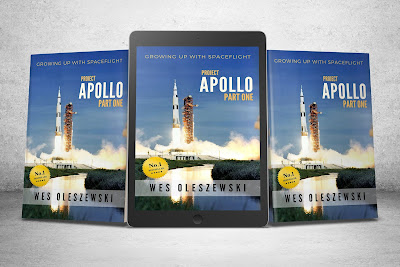 If you like the facts you read here... try one of my books HERE!

Or get an autographed and personalized  copy HERE


Posted by Wes Oleszewski at 9:27 PM No comments: