It strikes me that every space kid needs a space shelf... even if the kid is over 60.
On my shelf is stuff which likely pre-dates many of you who are reading this.

For example, the black plastic bag that you see pinned to the wall contains a piece of a crashed SR-71 from 1967.

Central to this post, however, is the little vehicle seen on the farthest right, directly in front of the Gemini reentry module.

That piece dates back a half century to the summer of 1971. 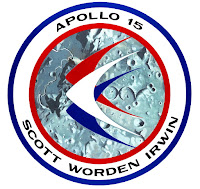 Considering that when the summer began the Apollo 15 mission was about to take place, and that they had the coolest mission patch EVER, and that their command module pilot was from Michigan where I lived, and that they were landing in THE most amazing spot on the lunar surface plus they had given their lunar module the beyond cool name of "Falcon," well it simply drove 14-year-old me into space buff insanity. I decided that I had to make a Falcon lander of my own... and put ants into it... and then land it some place remote, unreachable and preferably with a rille in which to land.
There was just one problem... making a "lander" and finding that location. After all I had just turned 14 and I didn't have a dime to my name, so I'd have to kluge something up from scratch.
From July 26th to August 2nd 1971 the Apollo 15 mission took place- and I was glued to every second of it. My rocket pal Cj Vanston joined me in the insanity. During the EVAs we were camped out in my room glued to my little portable black and white TV because family members kicked us off of the big, color, living room TVs. The coverage on all three networks was continuous, but regular family members could stand just so much and then Cj and I have to retreat to my room. When the mission was off the air we were launching model rockets or trying to do weightless simulations in my backyard above ground pool or his backyard built-in pool. It was the greatest event of that summer.
Afterward some of my friends were goofing around on "the big D" which was a small traffic island on the cul de sac of our street. There was a man-hole there and they were dropping fire crackers into it. I went to have a look, and down about 15 feet was the worn cement bottom with some large cracks and peppered with stones that kids had dropped down through the few two and one quarter inch holes in the manhole cover. What stood out the most was an eight inch wide drainage trough that ran through the middle. Suddenly, in my space program insane mind... It had a rille! 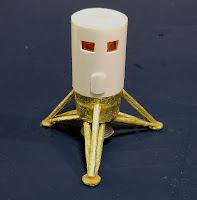 Of course to a 14-year-old space nut who'd just watched the expanse of Hadley Rille on live TV, this was enough to inspire the building of a lander and naming it Falcon. This is that actual lander from 1971.
The body was made from a disposable salt shaker that I'd nabbed from a recent wedding reception 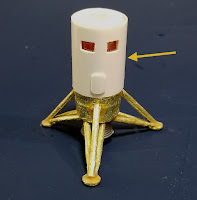 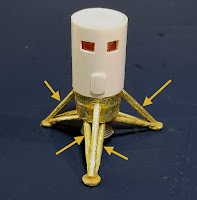 And the leg struts were made from toothpicks covered in the same gold foil that a brand of breath mints were wrapped with. The legs were just the right size to be angled through the vent hole in that manhole cover.
Likewise the descent stage was also wrapped in that same foil to disguise the fact that it was an inverted piece from a cheap game of checkers. 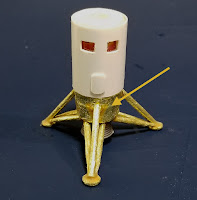 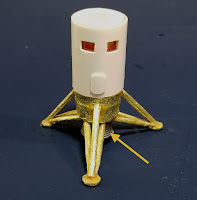 The descent engine came from a really crummy model that tried to pass it off as a Saturn V J-2 engine. 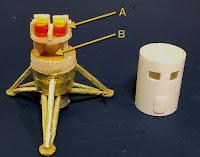 Inside was the cockpit with its couches for the F-4B ant space suits (A) and it even had a mid-deck (B) which I then called the "Egress Deck."
The inner structure was constructed so that the crew could see out through the windows- neglecting the fact that ants actually do very little with their eyes. 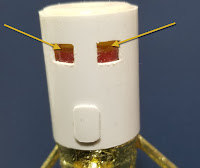 In the top, which was actually a cheap wheel from a rubber-band powered airplane that I'd wrecked, was a big screw eye used to hook and lower the lander down to the Apennine Sewer. 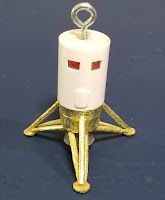 According to my crude notes of the time the first landing and recovery went very well. On the second mission- a 3 day stay- the entire crew croaked.
Darn.
Thereafter the little craft did survive for 25 years in a shoebox among tons of other childhood insanity trinkets and another 25 years on my space toy knick-knack shelf that denotes my insane, but fun childhood. I think the only thing sillier that the fact that I built and operated this thing was the fact that I've kept in for a half century.
They say that AD/HD people never grow up... here you have my proof.
Happy anniversary Falcon
Visit www.authorwes.com and check out "Growing up with Spaceflight" or look for them on Amazon

Posted by Wes Oleszewski at 4:00 PM No comments: