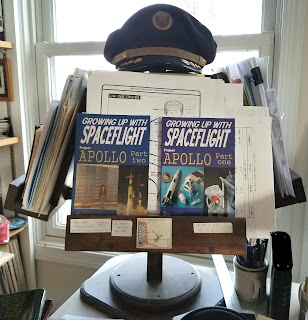 While finishing my 24th book I was gazing at my "lazy Jefferson" today (Thomas Jefferson had a device on his desk that allowed him to have about nine books open at once and he could rotate it around like a lazy Susan and reference the books without them cluttering his desk. I asked my Dad, who was really into wood working before he passed away, if he could build me something similar for four books- shown in the photo here.) I was considering a recent contact concerning my work. A fellow who is composing his doctoral thesis recently got in touch with me and informed me that he was citing my work in his composition for his Ph.D.

That is amazingly flattering as he is using some brief quotes of my "Growing up with Spaceflight" series. The material cited comes from "Apollo Part One" and "Apollo Part Two." Looking at the selections I get the impression he's going for the human aspect of that era.

Mark Twain is rumored to have said, "Some books are like fine wine, mine are like water. Everybody drinks water." In my own writing I have always held my books to that level of humble, yet I tried to make it really good water.

After seeing 24 titles published in 26 years I have looked into the adoring eyes of loyal readers and seen the jealous words of self-important critics and it is always the readers who are the ones that I write for. Yet you can never let either go to your head- ego is the sapper of souls. And I'm sure that in the market of spaceflight authors, the greats such as Andrew Chaikin and Dr. David Baker get cited in doctoral compositions all the time- as their books are fine wine. But for a guy like me who writes the books that are like water, it's a pretty flattering deal.

Of course after two years of working on book number 24 and now composing the final chapter, I'm at that point where my wife says that she can't wait until I get that damned book finished because the honey-do list has once again grown large around the house. She keeps me humble- like it or not.

Posted by Wes Oleszewski at 9:14 AM No comments: