A TRIBUTE TO TOM MINTIER

Today I was reading the Space Hipsters Facebook page and saw that CNN journalist Tom Mintier has passed away. He is best known to space buffs as a spaceflight announcer, yet he covered many other subjects world wide. He had the unfortunate duty of being on the TV, live, when the CHALLENGER was lost in January of 1986. I did get the chance to meet him several months after the 51L accident and wrote briefly about it in my book "Growing up with Spaceflight- the Space Shuttle" and here is that excerpt...

"Later that summer I was back up in Michigan, working a summer job at Tri-City Airport, when I happened to meet CNN’s science/space anchorman Tom Mintier in the lounge at the executive terminal. He was there to cover would-be presidential candidate Pat Robertson, who was arriving and being greeted by a throng of… exactly nobody. We started chatting about STS-51L and soon everyone nearby was listening. I told him my story and he talked about being live on the air at that moment.
“There’s a few million people listening,” he said glumly, “what do ya’ say? There’s just nothing you can say, the camera tells it all. There is simply nothing you can say.”


Even six months after the accident you could see that both of us were still a bit lost by the event." 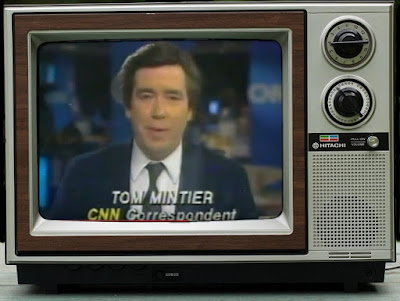 Tom Mintier broadcasting STS-51L and about to toss to the live NASA cameras for that fateful launch. Only a hand full of ATK engineers expected disaster and they were silenced by management and told to "Put on your management hat.".