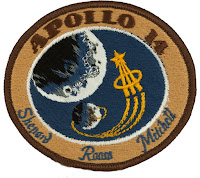 It's amazing to look back at Apollo 14 and consider that it took place a half century ago. I was a 7th grader in one of the worst junior high schools on the planet. I'd survived my first semester at that place and learned a few lessons. First off, making the honor role not only earned me a new portable TV set from my aunt Dolly, but I also earned getting thrown up against the lockers by three thugs and told quite clearly, "Dat ain't cool." Additionally, I was given a new Apollo 14 mission patch and learned that you don't take a needle and thread and tack that patch onto your jacket, because the thugs will rip it from your chest and steal it, telling you, you didn't have nothin' to do with that. Those are words that burn into your memory at age 13, and experiences you don't forget- ever. So, how does one survive? Simple, you find a place to go in your own mind, a blanket to pull over your soul. The Apollo Program worked nicely for that, and Apollo 14 was a good start... or course I had to keep it to myself.
I'd been looking forward to launch day for ten months. The following is an excerpt from my "Apollo Part Two" volume of my "Growing up with Spaceflight" book series, and takes us back to launch day and my family living room...
(the following is copyright 2015 Wes Oleszewski all rights reserved)

Launch day at KSC found a series of heavy rain showers moving through the area. Considering the self-generated lightning that had tossed Apollo 12’s launch into a tizzy and with the shadow of Apollo 13’s near-disaster hanging over NASA, Launch Director Walter Kapryan had some pressure on him. Adding to that was the feeling of many that if another major failure or accident should happen, President Nixon was poised to pull the plug on the entire program. Kapryan decided to call a hold in the count at T-8 minutes and two seconds and see what the weather was going to do. The hold lasted for 40 minutes and three seconds. All the while it appeared on our TV sets as if the weather over the shoulders of Walter Cronkite and Wally Schirra was getting worse. As time went on it began to appear as if this may be Apollo’s very first scrub of a manned launch.

All of “us kids” were gathered in the family living room in front of the TV; my sister, brother and a few neighborhood kids were there. There was no point in changing the channel, all three networks had Apollo 14 coverage on. Together we waited out the hold while I held court and answered what questions were sent my way; illustrating my points by using my 1/200 AMT Saturn V model. Of course I had my trusty copy of “We Came In Peace” at my elbow too. Any questions that I didn’t know the answer to, I simply made up a response that sounded real technical. It was a skill that much later in life served me well as an airline pilot speaking to passengers.

At 3:39p.m. Eastern time NASA public affairs officer Jack King came on with one of more than a dozen announcements he had to make during the hold,

"This is Kennedy Launch Control remaining in the hold, T minus eight minutes and two seconds at this time on Apollo 14. Standing by for further advisories from the National Weather Service aircraft which is surveying the cloud conditions in the area. Just a matter of a minute or two ago, the director of flight crew operations Deke Slayton called in to Al Shepard in the spacecraft and mentioned to Al that at least it’s more comfortable up there than it was in the old days."

This was a reference to the protracted holds that took place prior to Shepard's Freedom 7 launch back in 1961, when his bladder forced Al to "wet his pants." From the Apollo 14 spacecraft Shepard replied to Slayton, "Oh, my yes."

Jack King then went on to state, "He also added to Deke that; we're in good shape up here. We're standing by for further reports… Holding eight minutes and two seconds. This Kennedy Launch Control."

Finally, at 3:55p.m. Jack King came on with some good news, announcing that the count would be picking up.

"This is Kennedy launch control. Mark. We have resumed our countdown at T minus eight minutes and counting on Apollo 14. We're still keeping a close eye on our weather conditions at this time but Launch Director Walter Kapryan has made the determination to resume the count. This should put us with a liftoff at three minutes past the hour if all continues to go well. We are now starting the chill-down of the engine chambers on the third and second stages of the Saturn V launch vehicle. This is one of the critical elements and has to do with hold time. The chill-down has to last a precise period. We feed in extremely cold helium into the engine chambers of both the second stage and third stage to condition them for the very cold liquid oxygen and liquid hydrogen that will be flowing into the chambers when they’re due to ignite later during the powered portion of the flight. All is still going well as far as the launch vehicle, spacecraft and the three astronauts on board. Coming up to the seven minute mark, Mark! Seven minutes and counting. This is Kennedy Launch Control.”

As the count hit the two minute mark, CBS switched to NASA’s launch pad camera number 27 which was focused on the Q-ball cover at the tip of the launch escape tower. 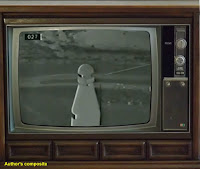 I had no idea, but as she was asking me the question Cronkite said, “That’s the Q-ball, the shield, at the very top of the Apollo 14 spacecraft configuration that blows off 10 seconds before the launch…”

I turned knowingly and parroted, “That’s the Q-ball ma.” Seeing the line connected to the cover she asked,

“Well, does it just stay there?” Apparently she had not heard Cronkite.

“It comes off at T minus 10 seconds,” I replied as if I’d known that all along.

Then I made a mental note to later go and find out what that Q-ball thing was for. Later I discovered it was for measuring angle of attack as the Saturn V flew through the lower atmosphere. Of course it would be a few more years before I learned what angle of attack actually was, too.

As the count hit T minus eight point nine seconds the five huge F-1 engines came to life. Long range news cameras at the press site had their lenses blinded as the brilliance of the Saturn V erupted through the rainy gloom. Close-up NASA cameras showed clearly the release of the hold-downs and the retraction of the tail masts as the launch vehicle lifted off at 4:03 p.m. Eastern time. In the wide angle shot the Saturn V itself could hardly be seen as the blinding flame from the S-IC over-powered the TV images. In our living room everyone broke into applause.

Indeed, the TV images did look very much like those of Apollo 12. The cameras followed the rising Saturn V for exactly 36 seconds before it vanished into the dense cloud-cover. Thereafter, the cameras panned down to show Pad 39A smoldering in the gloom. As the shot switched to Schirra and Cronkite, the buffeting of the departing Saturn V was hitting the CBS press building and looking closely I could actually see the window glass moving. Schirra reached up twice and placed both of his hands on the glass to feel it move.

Walter Cronkite had warned the TV audience that once the Saturn V went into the clouds the long range cameras would lose it. However, he was happily surprised to be wrong as the picture from the Riviera Beach camera, located 133 miles south of the launch site, came in crystal clear. Oddly enough, that camera gave some of the best images of first stage separation, skirt separation and escape tower jettison ever seen on television. The S-IC first stage could be seen falling away for 22 seconds and later both the tower and the S-IC/S-II skirt could be seen tumbling away for 31 seconds. As I watched, entranced, Apollo 14 remained on the TV as a single bright spot right up until Mission Control announced that Apollo 14 had cleared the Atlantic weather and just as those words were spoken, the bright spot dropped behind some clouds.

Staging of the S-II and the S-IVB came on-time and Apollo 14 was inserted into orbit around the earth after 11 minutes and 43 seconds of powered flight. The crew read from their Command Module Computer an orbit of 99 by 102.9 nautical miles.

It did indeed appear as if everything was going exactly as planned. What Shepard did not know was that outer space and the Moon had plenty of surprises waiting for him and the crew of Apollo 14, and none of them were good. In fact Apollo 14 would end up dealing with more glitches than any other Apollo mission other than Apollo 13. 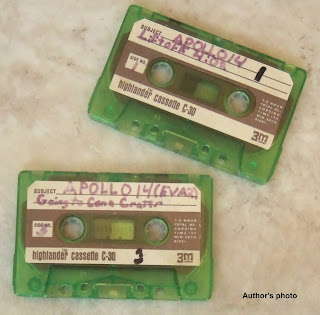 Apollo 14 was the first mission that I recorded. I used these two 3M C-30 cassette tapes, which gave me a whole hour's worth of time to capture the entire mission... I decided I needed longer tapes for future missions. Just 15 minutes per side didn't really cut it. Believe it or not, these tapes still play. 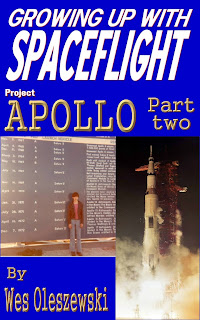 Read all of Apollo 14 by getting Apollo Part Two
www.authorwes.com
Or look for it in e-book at Amazon.com

Posted by Wes Oleszewski at 8:46 AM No comments: