Is this the video of a Saturn V's third stage separating? The answer is NO, the staging of the S-II and S-IVB was never "videoed"
and here's why... 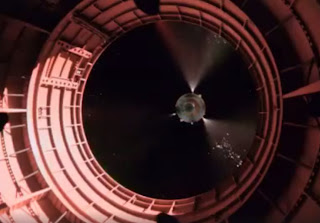 This is another of those social media/internet-based misconceptions that seems to always pop up and frankly, spaceflight "documentaries" produced by contractors who know little or nothing about the actual hardware are mainly at fault. The primary culprit in this myth is the scene shown above. It is a dramatic and eye-catching film of a Saturn S-IVB stage separating from its booster and igniting on the edge of space. This remarkable sequence is used over, and over, and over again by the creators of  spaceflight documentaries to represent the staging between a Saturn V S-II second stage and its S-IVB third stage, most often this image is attributed to Apollo 6... there's just one problem... that is NOT what you are seeing. 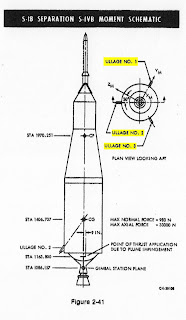 In fact what the video (which was actually film when it was captured by the onboard cameras and not magnetic "video") is the separation of an S-IVB from a Saturn IB- most likely AS-202. Now... how do we know that? you may ask. I mean, it's all over YouTube, that amazing internet source for reliable factual history, as being Apollo 6! And if it's on YouTube it must be true... right?

Well, there is one dead giveaway... if you look closely at the image or the video again, you'll see 3 little thrusters firing during the separation. Those are known as "Ullage Motors" and they were used to add some forward thrust during staging and help fully "seat" the liquid propellants in the stage. They are jettisoned shortly after they finish firing. The Saturn S-IVB ullage motors began firing 0.1 seconds prior to the stage separation command and burned for a total of 3.9 seconds. Approximately 15 seconds after stage separation a signal was sent to a series of explosive bridge wires which in turn ignited detonator blocks, frangible nuts and confined detonator fuse assemblies that released the spent motors as a series of springs cast them off away from the S-IVB. 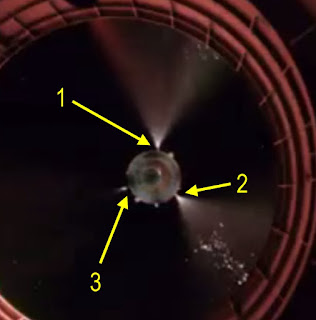 ALL Saturn IB S-IVB stages were what was known as "200 series" and were different from the "500 series" S-IVBs used on the Saturn V. The most outward difference (other than their paint job) was the fact that all 200 series S-IVBs were equipped with 3 ullage motors as shown in the drawing here. 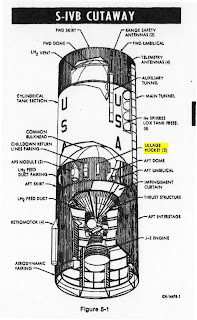 ALL Saturn V S-IVBs, or 500 series, were only equipped with 2 ullage motors. 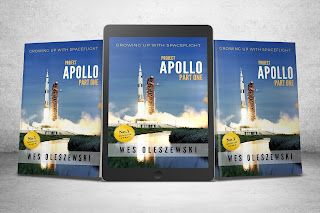 More Apollo facts can be found HERE!
Or get it in e-book by clicking HERE

How do we know that was true of Apollo 6? You may ask... because, of course, a "NASA" documentary video on YouTube says this is Apollo 6. Well, the answer comes right out of Apollo 6's documentation... 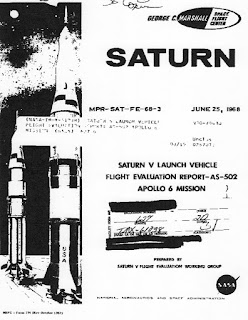 In this report we find charts and verbiage documenting the flight in great detail- including the following... 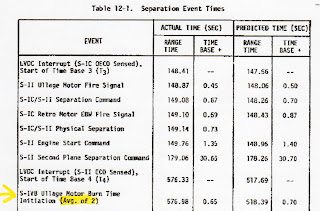 This chart details the "Separation Events" on Apollo 6. Notice the highlighted area where it lists 2 ullage motors and not 3. 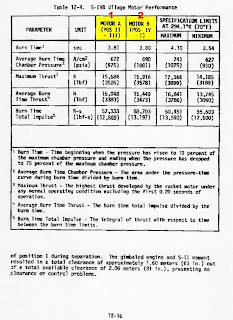 And from that same document the details of the TWO ullage motors firing are given. 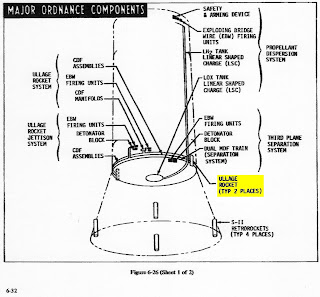 From another Apollo Saturn V document we have this graphic intended to represent ALL Saturn V vehicle's "Ordnance Components" for the 500 series S-IVB. Note again that there are ONLY 2 ullage motors.

Thus, we can safely conclude with 100% certainty that the YouTube scene depicts NOT a Saturn V, but a Saturn IB.

There are additional factors involved for those of you who made need to have your convincing furthered.

Consider, if you will, the mechanics behind how these onboard movies were obtained. The cameras were carried aloft in tubes and ejected after staging as camera pods. 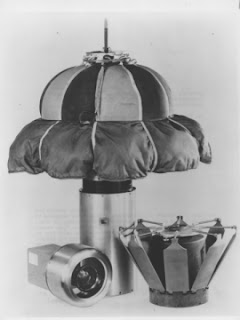 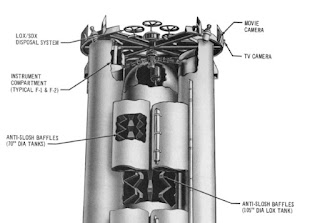 A Saturn IB, AS-202 for example, staged at ~34 miles in altitude- which is well below "space" and at a velocity of  4,059.82 miles per hour. This allowed for a distance down rage where the U.S. Navy could recover the pods and a speed that would provide a reentry heating that the camera pods could survive. A Saturn V S-II stage would normally stage with the S-IVB at ~180 miles in altitude (Apollo 6 experienced a 2 engine failure and thus staged far lower at 125 miles up) and ~14,385 miles per hour. Those distances would bring a camera pod down somewhere after about an orbit and a half- but it would make no difference as at that velocity the pod would burn up on reentry... just like the S-II stage itself. So, there was no way to recover the film from the staging.

Of course now some may ask, "Well, what about live TV being broadcast." Indeed some live TV from orbit was broadcast from the Pegasus micro meteorite satellite, but it was in black and white and never color. In 1968, when Apollo 6 was launched, there was no color TV camera that NASA could employ to be used in such a manner. (Apollo 10's small color TV camera would not even be created for nearly a full year yet.) Color TV cameras of the day were very large and heavy- too heavy to be used for sending staging images from an S-II stage.

The last Apollo launch vehicle to carry ejectable cameras was AS-503 which launched Apollo 8. That vehicle had cameras that were set up to film the departing S-II second stage after separation. Unfortunately, the cameras were lost at sea after ejection, or never ejected at all because the US Navy was never able to locate them. Thereafter, the added weight of the Lunar Module on all other Apollo flights caused the cameras to be deleted from the launch vehicles. The Saturn IB launch vehicles that flew the Skylab missions did not have cameras for two good reasons. First, there was no new engineering data to be gained as the characteristics of the launch vehicles was well known and telemetry covered all points of engineering interest. Second, there was no budget in either the Skylab or ASTP programs to pay for the logistics of handling the cameras. Thus, the era of the Apollo ejectable cameras and their fantastic images came to an end with Apollo 8 and the S-II/S-IVB stage separation was never... ever... filmed.

Posted by Wes Oleszewski at 1:30 PM No comments: