DID THE SATURN V NEED FINS? 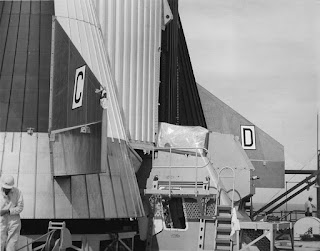 Very often the question comes up, "Did the Saturn V really need those great big fins?" When this is asked on internet forums there follows assorted postings from people who really do not know what they're talking about. Here's a word of advice- beware of any comment that begins with or contains the following phrases: "I heard" or "I think" or "I seem to remember" these are dead giveaways that the person posting is sitting at their keyboard with no real factual knowledge and simply wishes to make it look as if they have some knowing of the subject.

Additionally, watch out for the myths... such as...

MYTH: "The Saturn V really didn't need those fins, they were just for decoration."

FACT = The fin decision came about in early 1961 before the first Saturn I ever flew. You can find the explanation of their purpose in NASA, MSFC document MPR-M-SAT-61-5 published July 17, 1961, Page 208, Section 13.1, which reads in part, "The actual fins were not optimized for aerodynamic properties alone  but were designed  in conjunction with control output of the swivel engines  and the environment  that the vehicle  would encounter.  With four 188K  engines  swiveled to 10°  control angle,  various amounts of wind  and sheer gradients can be tolerated.  A highly unstable vehicle in the high dynamic pressure region  of flight  is severely  restricted  unless a very large control  torque  is available.  This might have been  designed into the system;  however,  this would have created another  undesirable situation . That is,  in case of shutdown  of the engines  high divergent rates  would exist, a condition which is not desirable  for a manned vehicle."

Now, let me translate that... the key in the statement is, "a condition which is not desirable  for a manned vehicle," and the term "torque control." The concern, even early on was one of torque vs arm. By arm I mean the distance between the center of the vehicle's rotation and the point where the astronaut's hand grips the abort handle. It was concluded that if one of the gimbaled engines should go hard-over or somehow fail while thrusting in an undesirable direction, which was common in the early 60s, the Saturn was so tall that the torque applied to the upper area where the crew were located would be so great that it would pull the astronaut's hand away from the abort handle and not allow for a manual abort. Additionally, the above cited document goes on to explain that the fins add to the stability assurance in the clustered engine configuration in the case of engine failure. Keep in mind that this was the first time that an entire family of vehicles were designed totally based on the clustered concept, which, up until October 27, 1961, when SA-1 successfully flew in spite of being nick-named "Cluster's Last Stand" many so called rocket "experts" believed clustering would never work.

Thus, the fins had a real and practical purpose on the Saturn vehicles, including the Saturn V. If one of the F-1 engines went hard-over, especially in the lower atmosphere, the fins would provide a counter to the resulting torque just long enough for the CDR to turn the abort handle.

Additionally, the fins added stability during the transition through the area of maximum aerodynamic pressure as well as in the altitudes where jet stream winds could cause significant wind sheer. The ideal was to have those gimbaled F-1 engines actually need to move as little as possible.

And now some common myths about the fins...


MYTH: "von Braun was really in love with fins, so he insisted that they have them on the Saturns."

FACT = This one is so silly it actually made me laugh out loud. People who write such thing simply demonstrate that they know very little about Dr. von Braun and little about the design efforts of the several thousand people who created the Saturn V. The MSFC team that designed the original Saturn C-1 for the ARPA and were led in large part by von Braun, designed a booster with no fins and the early Saturn C-5 (predecessor to the Saturn V) designs also had no fins.

FACT = Apples and oranges- two very different rockets with different initial purposes, engine configurations and most of all arm lengths.

MYTH: "The first Saturns didn't have fins, so there was really no need for the later ones to have fins."

FACT = Read the above and you'll see how silly this statement is.

MYTH: "I believe in the end they were more for show than anything; the gimbaling motors kept the rocket stable. the fins as stabilizers were pretty useless I think at the velocities used."

FACT = Note the term "I believe" used here, on par with "I think." This person is dealing from no hard research or knowledge. But, let's take a look at the "useless" contention. During the Apollo missions weight was so critical that NASA was doing everything in their power to scrub un-needed weight of ANY kind. They went as far as offering $10,000 for every pound that could be scrubbed from the LEM! There is the famous legend that they were also limiting the number of band aids in the first aid kit (a legend that I've heard 3 Apollo astronauts restate, but have yet to find the paper work to prove it) Now, in that environment, if the Saturn V fins, which weighed in the neighborhood of 1,000 pounds,  were in fact "useless" would not they be the first thing scrubbed?

MYTH: They did offer some stability but mostly it was habit. All rockets had fins so the Saturn V should too."

FACT = This was another one that actually made me laugh out loud. "ALL rockets had fins..." Hummm... the Saturn I, Block I, SA-1,2,3 and 4) had no fins. So there goes the "All rockets" part of the statement. Here's the fact- solid ENGENEERING got us to the moon with the Saturn V. Period! Nothing, and I do mean NOTHING was done out of "habit."

In fact, in the September 1964 issue of popular science, Dr. Wernher von Braun spoke specifically about rockets and fins including the Saturn V. 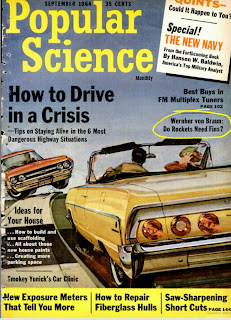 Where he said in part: "Suppose a large vehicles such as the Saturn five has a serious autopilot (IU) failure at the most critical part of its ascent through the atmosphere (MaxQ). When the speeding rocket bucks the most severe aerodynamic forces. A failure in a swivel actuator (engine gimbal) may throw one of the five booster engines into a "hard over" deflection. In such a case, if I inherent aerodynamic instability assisted in rapidly increasing the angle of attack, structural overload might break up the rocket before the astronauts in the Apollo command module triggered their escape rocket…”
“…in the Saturn V booster, fins are not to provide perfect aerodynamic stability under all conditions-that would take fins of excess size. But the fins reduce the aerodynamic instability enough to make sure that the astronauts can safely abort, no matter what technical trouble may afflict their space vehicle. Our aim is to reduce the turning rate rotational speed at which the aerodynamically unstable Saturn V, when stricken by an autopilot failure, would turn into an angle of attack at which its structure would be bound to fail. One might say the purpose of the fins is to extend the period of grace that the astronauts have to push the "panic button."


My thanks to all of the arm-chair rocket people who made and those who will continue to make these silly remarks and internet posts- I really love you folks. This was fun.

Posted by Wes Oleszewski at 9:04 AM 2 comments: