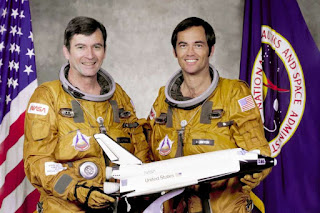 The following first hand account of  what it was actually like to be there for the first space shuttle launch, is a excerpt from my book, "Growing up with Spaceflight- Space Shuttle." If you want to find out more about what it felt like to witness many of the shuttle launches, and you like what you see here- just get the book... it's that easy.

On the trip down toward the launch site we chattered about spaceflight history. Then, as we came within a dozen miles of Titusville, we suddenly saw spaceflight history. Above the trees the darkness was slashed by the crossed white beams of the pad spotlights. Although we could not yet see the shuttle, it was an image that we had always seen in books, magazines and on television. In spite of yourself it made your heart stop and your jaw drop. 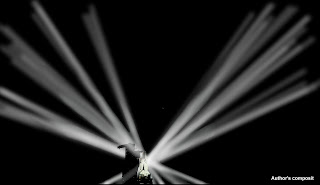 Entering the town of Titusville we suddenly discovered that we had no idea where the hell we were going. Where would we park? What about private property? Collectively we decided just to turn toward the river. Driving down Grace Street we hit Riverview and the riverbank itself. For a few minutes we cruised up and down Riverview calculating a good place to park. I spotted a county pumping station and suggested we should park near it. That way if any of the locals gave us a hard time, we could just go onto county property. We pulled in, bailed out of the car and just stood there frozen by the sight of the white Space Shuttle bathed in those crossed spotlight beams. For a Moment, all three of us were kids again gazing at the wonder of spaceflight. 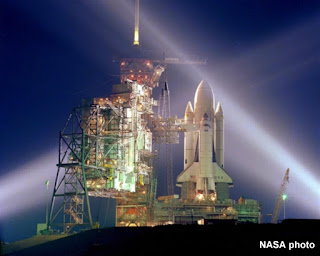 Snapping out of the Shuttle’s spell for a Moment, I saw that it was just after 10 pm and I decided to hike up Grace Street to the Mister Doughnut shop up on US1. There I found a pay phone and I called my folks up in Michigan to ask “Guess where I am tonight?” Being the parents of a rabid space-buff, it was an easy guess for them. When I returned to the car I was amazed to see that in the past 20 minutes, nearly every parking spot along the riverbank near us had been taken, and there were more cars coming. Clearly, there would be no problems with the local residents tonight.

Opening the trunk of his car, the guy who had parked right next to us, revealed a sort of mobile Space Shuttle flight-following station. Attached to the underside of the trunk lid he had a poster depicting each phase of the STS-1 flight profile. He had charts and table that listed each mission event, as well as assorted abort profiles and abort destinations. He had Shuttle cut-away diagrams that detailed ever component. Most importantly, however, he had a small portable TV that ran off of his car battery. In 1981 such TVs were not rare, but in our present location his TV was the center of attention.
Several hours into the night I decided to go for a walk up US1 and see what may be happening. The streets were busy as I strolled along, and every sign that could have its letters rearranged had a Shuttle best wishes message. After about a mile or so I came upon the local mall. Even though it was the middle of the night, the parking lot was filled as if it were the day before Christmas. The doors to the mall were propped open and people were coming and going. I went inside and was amazed to see that many of the stores were open and doing a good amount of business. Most noticeable was the local toy store which had set up a table just outside of their door. Upon the table was a cash register and stacks of Space Shuttle models which were apparently selling like crazy.

When I got back to the riverbank everyone was standing around gazing at the distant Shuttle or talking spaceflight. We talked about every aspect of spaceflight past, present and future. Most of us simply agreed that we had no idea as to what STS-1 would do, or what the Shuttle’s future would really be. It was like going to a space-buff convention. There was, however, only one problem with our space-buff paradise: access to a bathroom. On a later trip up the road to buy a cup of tea I found out that the guy running the Mister Doughnut shop up on US1 did not mind folks using his restrooms, as long as they bought a doughnut “or somethin’.” When I got back to the riverbank I spread the word and soon folks were strolling up the road to Mister Doughnut and returning “rested” with coffee, or a pastry, or both in hand. STS-1 was already helping the local economy, and the guy running the doughnut shop could testify to that.

Read the rest of the story in "Growing up with Spaceflight" "Space Shuttle"
Posted by Wes Oleszewski at 1:29 PM No comments:

The question often comes up, "What held the weight of the Saturn V as it rested on the pad?" 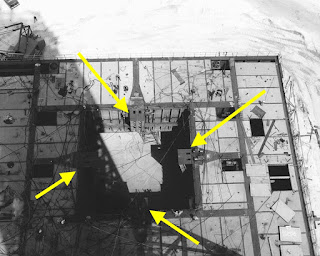 The answer is that the Saturn V rested upon four hold-downs anchored into the walls of the flame opening on the pad. Seen in the above photo- indicated by the arrows- these four pads were actually an integrated part of the overall hold down mechanism.

Keep in mind that the Saturn V, without the apollo spacecraft stacked upon it weighed in total just over 510,000 pounds. Yep- that's all... so it could easily rest and be transported to the pad sitting on the hold down pads. The more than 6,000,000 pounds of weight at liftoff was made up mostly of propellants. 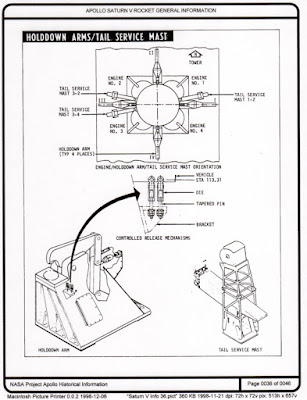 The hold down itself, most of which was constructed above the pads shown earlier, clamped into the base S-IC stage's's lower ring and due to the simple law of inertia was more than enough to hold the vehicle against the thrust of it's F-1 engines as it built up to full power. 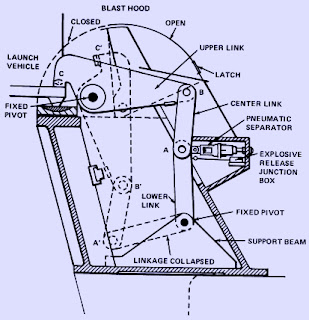 When the launch sequencer gave the command to release the vehicle, the clamps raised (the dotted line position seen above) and allowed the vehicle to move that first millimeter and begin trading inertia so it could lift off.

Posted by Wes Oleszewski at 7:32 PM No comments: 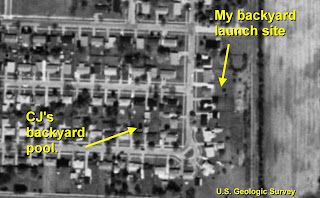 Recently there appeared a cartoon of a kid who splashed down his model rocket into his backyard pool.

The story begins with my space-buff pal CJ Vanston and I in the summer of 1971. It was about two and one half weeks after Apollo 15 had splashed down completing an historic mission to Hadley Rille. CJ would come to my neighborhood to spend about a week with his dad and step-mom every two weeks during the summer. In between those visits we'd both cook up crazy model rocket projects to punch holes in the sky over Sheridan Park- the subdivision of Saginaw, Michigan where I resided. Then, as soon as CJ hit town- all hell would break lose and the neighbors would be frightened for sure. The neighborhood kids, however, would be thrilled... especially when something went wrong.

Of course at the ripe old age of 14, we always liked having an audience. The kids in the neighborhood would flock to my house at the first familiar "swoosh!" of one of our rockets. They then would peer through the cracks in the stockade fence that surrounded my backyard and watch as CJ and I rigged the next rocket. At the next swoosh, the chase was on as they all followed us downrange for the recovery. We launched from my back yard because a large farmer's field was directly behind my house and I had a lot of backyard room. CJ's back yard was mostly taken up by one of the neighborhood's few in-ground pools, so mine afforded the best launch site.

We had already done one flight this fine summer day and now we had a crowd of kids and stingray bikes all waiting on the next launch. This one involved a rocket with a see-through payload section and several ants aboard. CJ was really into B14-5 core-burning, high impulse engines that summer and so that was probably what was in this bird.

The launch boosted normally and much to delight of our rocket watchers. The B14-5 engine, however, had the thing really haulin' ass and when the ejection charge went off and the shockcord snapped! The booster section simply fell away while the payload section, on it's parachute and devoid of the booster's weight, began to drift away in the breeze.

CJ and I immediately realized that the payload section was heading off toward the neighborhood houses. We headed through my garage and into the street in a trot while keeping our eyes locked on that parachute. The wayward payload was on an "as the crow flies" course toward CJ's street. In fact, it was headed directly for his house! On foot we had to run down my street, around the corner and three doors up his block to intercept the descending payload. As we got to his house we arrived with a flock of neighborhood kids behind us just in time to see the parachute vanish behind his house.

Dashing up the driveway we both burst through the gate to his fence and saw the payload section floating in the middle of his pool! For a moment we were a bit stunned by the totally accidental landing in his pool. Looking behind us we saw a bunch of the neighborhood kids looking at the two of us. Here we were, the two space geeks who had launched from one of our backyards and splashed down in the other's pool. We looked at one another and simultaneously raised our hands...

"SPLASHDOWN!" We shouted in unison, "Just like we planned it!"

Everyone but us was amazed.

Get the whole series autographed HERE

Or get it on e-book 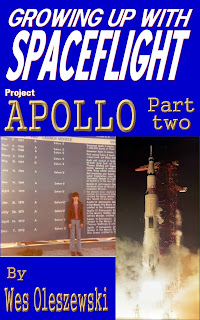 Posted by Wes Oleszewski at 8:12 PM No comments: