Even Astronauts Can Get Lost.

As an instructor pilot I had some important lessons that I wanted to be carved in stone in every student's soul. Things such as "Never try and rescue a bad approach- just go around and start again." and "If that engine blows, this bird belongs to the insurance company- just save yer' ass." or "If the takeoff roll doesn't feel, it ain't right, ABORT and figure it out on the ramp." Basic stuff like that later saved the lives of two of former students. One thing that I carved into the souls of those future pilots was, "If you don't know exactly where you are, if your position is in doubt... YER' LOST! Just admit that and take positive steps to find your exact position. Stuff your ego in your pocket, contact ATC and tell them you are lost. Admitting you have a problem is the first step in fixing the problem." Any pilot can get lost, even astronauts. That is a lesson I learned on February 5th, 1971 as I sat in front of the family TV set bathed in the pre-dawn darkness and gazing at the the stagnated television image of  the rise of Cone crater as I listened to the distant voices of Shepard and Mitchell. 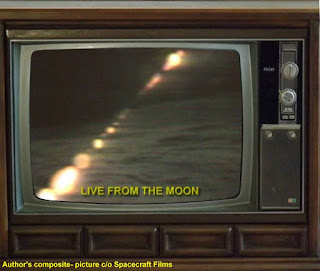 The following is an excerpt from my book "Apollo Part Two" and my six book series "Growing up with Spaceflight" it is copyright 2015 Wes Oleszewski, all rights are reserved no part may be reproduced in any form.

There is a saying about the best laid plans of mice and men… and perhaps 13-year-old space-buffs. My alarm went off at 3:45 in the morning, exactly as planned and I sprung from my bed; wide awake as if it were noon. I had left my EVA-watchin’ equipment set up by the TV and had received orders from my Mom,

Such was not a problem because I did not need any more background noise on my tapes anyhow. Turning on the television I discovered, to my shock, that the EVA was already underway! Looking around at all of the clocks, I could not figure out where I had made my mistake. I was up an hour and 45 minutes early, yet here were Shepard and Mitchell already heading toward Cone crater! Where had I gone wrong? I had planned it out so carefully! I sat there for the longest time puzzled and disappointed that somehow I had screwed this up. It was not until later into the EVA that I discovered that the crew had elected to start the event a remarkable two and one half hours early! There was no way that I could have planned for that.

Once Shepard had turned the TV camera to look at the crew’s path of travel toward Cone crater, the two astronauts vanished over the hill in about seven minutes. From then on all we had on our television sets was the image of what the crew thought was the rim of Cone in the background and the undulating terrain in the foreground with a series of glare splotches across the view from the upper right to the lower left. Most importantly for me, however, were the words “Live From The Moon,” on the bottom of the screen.

Trekking up toward Cone crater, Shepard and Mitchell were about to get a big lesson in the laws of lunar exploration. The human brain is hard-wired to judge distances largely based on how known objects appear within our atmosphere. Our depth-perception is based in large part by looking through the particulates suspended in the air. Even on a very clear day, there are still particulates in the air and thus we judge distance subconsciously by that standard. Additionally, a house, or a fire hydrant, or even a stop sign is a known object with a known dimension. Our sense of depth perception takes that known data and translates it into an approximation of distance. On the Moon, there is no atmosphere and there are no known objects, thus there is almost no depth perception. To make matters worse for the traversing crew, the photos and maps of their landing site that they carried with them and had studied until they were committed to memory, were all from a straight-down point of view. Almost none of their traverse training and been done with a surface point of view. If you want to see this difference, simply stand in your own living room and look down at your carpet. Then take a mirror and hold it edge-on at the surface and tilt it so you can see the same room from a surface level point of view. You will find yourself lost in a place with which you are very familiar. Next remove your depth perception and you have the situation in which the Apollo 14 crew found themselves. Now, you can make it worse by adding a boulder field with rocks the size of cars. Additionally, the crew found themselves walking in terrain that consisted of rolling hills some being 12 to 15 feet high. The result was that once they went over a hill they lost sight of anything beyond the next hill. Their landmarks were largely craters that were well defined in the over-head photographs of the area, but once actually down in the terrain those landmarks simply became lost in the undulations.

Furthering the problem was the fact that the approach to Cone crater was not a linear incline, rather its slope increased as the crew grew closer to the rim. Additionally, the crew had never pulled the MET for this distance up-hill while wearing inflated suits. The lunar soil was softer and deeper than anyone had figured and the MET had turned into a rolling pain in the butt. The two astronauts actually found they could make greater progress on occasion by picking the MET up and carrying it. Finally, ahead they saw a large rise and figuring that it was the rim of Cone crater they headed up it. What they actually topped was nothing more than another roll in the local terrain.

“We haven’t reached the rim yet,” Shepard reported dejectedly to mission control.

Mitchell, now also breathing heavily, added, “Oh boy… we got fooled on that one.” He later added that, “Our positions are all in doubt now…”

Running behind the time-line, they were nearly exhausted and now they were lost. Nothing looked familiar from their training. Instead of exploring a giant lunar crater, the Moon had handed them a funhouse of mirrors and confusion. The question was should they struggle on to that next ridge, the distance of which was anyone’s guess.

Sitting in my living room I knew that these two guys were in trouble and I was only a 7th grader but even I could tell that this part of the EVA was clearly not going as planned, but all I could do was listen. In Houston, the grown-ups were in exactly the same state of affairs. The two moonwalkers sounded spent and you could hear their labored breathing over their microphones. These were guys in top physical condition and the lunar environment had rapidly sapped their strength.

“I'd say that the rim is at least 30 minutes away." Shepard estimated, "and what I'm proposing is perhaps we use that as the turnaround point. It seems to me that we spend a lot more time in traverse if we don't… and we don't get very many samples."

Mitchell disagreed saying that their objective was at the top of the next rise. Mitchell was in no mood for stopping, however,

"Oh, let's give it a whirl. Gee whiz. We can't stop looking into Cone crater. We've lost everything if you don't get there."

Although Shepard insisted after the EVA that at no time were they disorientated or lost, Mitchell’s real-time comment that, “Our positions are all in doubt now…” betrays their actual situation. If they were not disorientated, then they would have been properly orientated, in which case they would have simply turned in the correct direction and walked to the rim of Cone crater. Likewise, if they were not lost, they would have known that the next ridge straight ahead was a canard and not the rim of Cone crater as they decided it was at the time. The most difficult thing for pilots to do is admit that they are lost. It is far more palatable to just say that someone moved the crater on you.

It was at that moment that Alan Shepard put away his Right Stuff white scarf, put aside his ego and made the absolutely correct command decision. They had not come all this way just to look into a crater, rather their mission was to sample boulders ejected from that crater. It was time to say that they were surrounded with what they had come for, sample the local boulders and complete their mission. Later, Shepard and Mitchell would look at photos of the boulder field and conclude that they were within 150-300 feet of the rim of Cone crater. Four decades later, NASA’s Lunar Reconnaissance Orbiter would take high resolution photos of the landing site showing Shepard and Mitchell’s footprints running parallel to the crater’s rim, stopping and turning back within about 300 feet of their objective.  Had they kept going in their established direction, they would have walked right past Cone crater without ever seeing it.

Mitchell really wanted to press on to the next ridge, but Shepard insisted,

"I think we’ll waste an awful lot of time traveling and not much documenting."

Mitchell asked Houston how far behind the timeline the crew was. CAPCOM replied that they were 25 minutes down.

"We’ll be an hour down by the time we get to the top of that thing," Shepard insisted, noting how little geology had been done for the amount of walking that had been done,

"You got six samples," he flatly stated.

Shepard decided that the boulders that now surrounded the crew were the same as those found on the rim of Cone crater and it would satisfy the mission’s objectives to sample them rather than struggle on ahead; he was absolutely right. The crew did their sampling and turned back toward ANTARES.

When the two moonwalkers turned around and looked down hill, they were quickly able to pick out landmarks. Yet, as they began walking down into the undulation once again, they quickly lost sight of nearly all those landmarks with the exception of a single huge boulder. Using that and their own footprints they were able to accomplish the return leg of their traverse taking rock samples along the way.

Apollo 14's second and final EVA ended with Shepard's really fun golf shots and that turned out to be what the media and most of the public focused upon. My focus was on the fact that even astronauts, whom I considered to be the best pilots in the world, could actually get lost on the lunar surface! It was a lesson that would be driven home again 14 months later when Young and Duke strolled off to sample a boulder that was "...just over there..." and it turned out to be a rock the size of a three story house! We watched on TV as they loped off toward it and their figures seemed to shrink. Duke exclaimed, "Look'et the size of that rock!... The closer I get to it the bigger it is!" Without depth perception it is easy for the Moon to fool us little humans. It is also a lesson it the fallacy of Shepard trying to land the LEM without radar. He would have had to take extra time to attempt to judge his altitude and run out of fuel in the dead zone. Most of all it should be a lesson for the future.

For more on what it was like during Apollo 14, check out my books at www.authorwes.com

Posted by Wes Oleszewski at 4:55 PM No comments: