HOW THE CRAWLERS WERE BORN 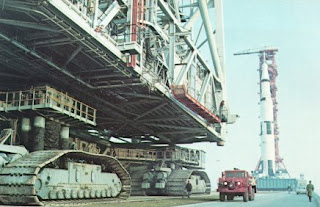 Exactly how were the two huge crawler-transporters that move the giant rockets from the VAB at the Kennedy Space Center to launch complex 39 pads A and B born? It’s a question that has come up often. Frankly, very few people actually know the correct answer. For the most part the official public pamphlets, the bus tour guides and even the space agency’s own web sites sort of write around that question. They direct you toward the mechanics of constructing the vehicles on-site and the tremendous astonishing weights involved and then they press on to the Saturn V and other amazing details. Yet, the question remains… who thought of these machines? Someone or some group had to come up with the idea in the first place… right?

First of all for us in this search- forget everything you read on Wiki… whatever, and what is posted by on social media by self appointed “spaceflight experts.” We are going to use a source who was there, who actually managed the effort to find a way to move the huge “Saturn C-5,” which later became the Saturn V, from, what was originally called the “Vertical Assembly Building,” that later was renamed as the Vehicle Assembly Building (VAB) at the Florida “Moon Port” which later became the Kennedy Space Center (KSC) and its launch pads. That person’s name was Garland D. Johnston and he worked at NASA’s Marshall Space Flight Center (MSFC) in Huntsville, Alabama.

Johnston’s task was a daunting one and had actually started in 1962 when a team from MSFC’s Structures Design Branch consisting of himself, Charles “Chuck” Gassaway were sent down to KSC to meet with another large team on the subject of how would we launch the next generation of Saturn rockets. The first two Saturn I boosters had already been launched from Cape Canaveral’s Complex 34 and Complex 37 was under construction for the Saturn I Block II, but the scramble to get to the moon was on and everyone was looking ahead to far larger boosters. The meeting at KSC was headed by an Army Corps of Engineers Major by the name of Rocco Petrone and covered a very wide range of topics. Petrone, like a good Corps of Engineers officer, divided the monster task by having everyone in the room stand and state their background and credentials as he and his aid took notes. Then he announced that five of the following people were to step across the hall with him for a splinter meeting. The names he called were Johnston, Gassaway, Bill Bodie, Don Buchanan and Ed Davis. In that splinter meeting Patrone announced that they would be the five people who would figure out how to launch the Saturn V.

They were to listen to experts from all ranges of rocketry and construction concentrations and everything from how far apart the pads would have to be to remain operational if the Saturn V exploded to what sorts of vibration would be expected from 7.5 million pounds of thrust. Interestingly the pad distance was finally calculated as 9,000 feet by the group. Of course the first part of their problem would be moving the booster to the pad.

Ideas as far ranging as using water canals to float the stack from the VAB to the pad to using railroad rails were all considered, yet none of those met the math that was needed.

On a Monday when Johnston was back at his desk at MSFC, the answer to this huge show-stopper strolled casually into his office. An Army PFC who was on loan to MSFC by the name of Bobby Erwin had just returned from his honeymoon in Paradise, Kentucky came walking in.

“Garland,” he said, “you won’t believe what I saw last week when I was up at my daddy’s farm. Bucyrus-Erie shipped a strip-mining shovel down to my daddy’s farm in pieces and put it together there. It took 300 railroad cars to bring it all down there. It’s eating its way over the coalfields now and building its own road as it goes. It has a platform as big as a football field. It has tracks 8 feet high with diesel engines in each track. The platform has no vibration on the table and it maintains the table flat within one-quarter of an arc second.”

The moment that Johnston heard Erwin say “a platform as big as a football field” it struck him like a thunderbolt. This was how they could move the Saturn V! He immediately had Erwin sketch out a drawing of the huge machine on a piece of notebook paper. They illustrated it with four double tracks, one on each corner, and did a stick- figure image of a six foot tall man by one of the tracks and the notation “as big as a football field.” Johnston then tore the notebook paper loose and ran down the hall to the fire escape and took that route down stairs to Buchanan’s office and ran in nearly shouting, “Don! We have a way to launch the Saturn V!” Buchanan took one look at the sketch and upon hearing what Erwin had told Johnston he agreed that they were finally on to something practical. They started the telephone tree calling everyone in their group and then Buchanan called Redstone Airfield and ordered the NASA aircraft. He flew to KSC that same day and presented the sketch to Petrone and KSC director Kurt Debus, both of whom immediately approved the idea. With that he called Johnston on the phone and told him to get Bucyrus-Erie on the phone and tell them what NASA needed and that they wanted them in Huntsville immediately. The only problem was that KSC currently had no funds to pay Bucyrus-Erie for their travel and for drafting up a set of plans.

Undeterred by that problem, Johnston went to Francis Tucker who was the administrator for Gustav Kroll, the Chief of the MSFC Structures Design Branch. Tucker hurriedly went through the budgets and found $10,000 that they could offer to Bucyrus-Erie to come to MSFC and start design work on two of the most historic and iconic crawlers ever built. Bucyrus-Erie created a set of specifications “as thick as a Sears catalog” to which the MSFC team added a few changes and slapped a NASA cover on it. They put the job up for bids thinking that certainly no one else but Bucyrus-Erie would bid on such a machine. They were wrong… Marion Power Shovel outbid Bucyrus-Erie and ended up being the ones who constructed the two crawler/transporters that we see today.

So, now you know the true and accurate story of how the crawler/transporters were born back in 1962. This was largely sourced from a letter written by Garland Johnston and included in the MSFC Retiree’s Association book “50 Years of Rockets & Spacecraft in Rocket City” published in 2002.