STS-3; DTOs and the Myth of the "Wheelie Landing" 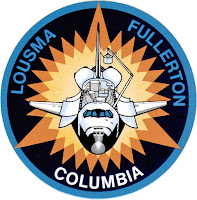 The following is an excerpt from my book "Growing up with Spaceflight- Space Shuttle" and is protected by Copyright 2015 Wes Oleszewski. No part of this may be reproduced in any manner without expressed permission of the author.
Dawn at White Sands revealed absolutely perfect weather for the landing. This segment of the mission was scheduled to be test piloting to the greatest degree as the final DTOs (Designated Test Objectives) would be accomplished. Jack Lousma was required to test the auto-land system to a point far beyond normal operation and far beyond any previous flight. He was to take over manually at scheduled points during the entry and put in some small control inputs such as forward stick to neutral stick to back stick than to neutral again, all at one second intervals. Then he was to reach up on the glare shield and punch the button that would activate the auto-land. In each of these cases the crew was to note how the auto-land responded. Lousma estimated that he did this procedure about 10 times. Interlaced with that series of tests, a similar test sequence was performed in the roll axis as well as with the body flap. The same exercise had been performed in the simulator numerous times, but what the crew of STS-3 was to discover was that the simulator and the actual orbiter did not perform alike at some points. 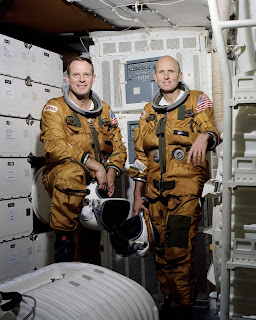 In addition to the auto-land response DTO, the crew also was scheduled to test the auto-land all the way down the flight path, nearly to the ground. It is worth making a note at this point in the story that the computer’s auto-land software had not yet been written for the final flare, touchdown and rollout. The auto-land software had only been written to the point of intercept of the inner glide slope. For those of you reading who have not flown high performance or heavy aircraft, that sort of an approach may sound like a milk run, but in fact it is not. Most pilots of such aircraft would rather hand-fly it down. Personally, I prefer to hand-fly a turbo prop from about 10,000 feet down and a jet from 18,000 feet down. Every Shuttle pilot I have talked to feels the same way and would rather hand-fly as much as they can all the way down. But in the case of STS-3, Jack Lousma’s DTO was to ring out the auto-land, and so he did.

CDR Lousma executed the testing through reentry and the switchovers appeared to be normal. Then, as directed by the mission profile, he engaged the auto-land at 12,000 feet on the outer glide slope. At that time the Shuttle approach PAPI, a series of lights located beside the runway that gives the pilot visual information concerning his glide slope, indicated two red and two white on a 19-degree glide slope and on center line.

"That was the last time I saw a stabilized airspeed,” Lousma recalled, “although the automatic system controlled OGS (Outer Glide Slope) well, including the transition from OGS to IGS (Inner Glide Slope)."

In short, the auto-land system was causing wide swings of the speed brakes during the most critical portion of the landing, rather than mimicking the inputs of a manual approach. It was later discovered that the software in the simulator that everyone had considered to be the mirror image of the software in the orbiter was not that at all.

As directed in the flight plan, Lousma took over manual control when the orbiter was stabilized on IGS. This took place between 200 and 150 feet AGL. As he took control he noted that the controls “felt different” than they should at that point. The vehicle was carrying more airspeed than normal at that phase of flight. Although he was 5 knots over the gear deploy speed he called for the gear and Fullerton lowered the landing gear. It is important to note here, again for any non-pilots who may be reading this, that deployment of landing gear is normally dependent on speed and not the observations of persons on the ground or the proximity of the aircraft to that ground. In the case of STS-3, to people on the ground it appeared as if the gear had come down low and late. In fact it was deployed somewhat early as the vehicle was 5 knots too fast.

Another result of the higher speed was that the touchdown point was now farther down the runway than desired. Like any good test pilot, Lousma negated the error by simply planting the aircraft on the runway. It is important here to also note one thing about the Shuttle that a lot of people do not understand. When rolling with all of their wheels (two main with a total of four wheels and the nose gear with its two wheels) on the ground the Shuttle orbiters had a negative Angle Of Attack (AOA). Thus during the landing rollout after the main gear was on the ground and the vehicle began to slow the nose would drop through from a positive AOA, to a neutral and then to a negative AOA very rapidly. The pilot was required to compensate by consciously "flying" the nose down to the ground. Originally the orbiter’s nose gear had been designed with a longer strut to compensate for this characteristic, but a subsequent weight scrub had negated that idea. Lousma was well-prepared for this characteristic, but as COLUMBIA's main gear contacted the runway the nose immediately began to go down. The plan, however, had been for the CDR to hold nose up and perform aerodynamic braking from the point of touchdown until slowing to 165 knots. Instead, the COLUMBIA's nose gear was now headed toward the runway at 220 knots. Instinctively, Lousma made a quick pitch-up input with the rotational hand controller, but the nose continued down. He immediately entered a second input which was greeted with a rapid nose up response. He corrected by putting an additional nose down response and this time regained authority and the nose wheels were placed on the runway. The orbiter rolled to a stop 13,723 feet down the runway.

It was later discovered that there was a divergence in the longitudinal contrast software for the Shuttle’s landing configuration. That, combined with the additional speed that the auto-land system had left the orbiter conflicted with the gain setting in the software. This caused the fly-by-wire system to impose an abnormal delay between the pilot’s inputs into the hand controller and the movement of the control surfaces. In simpler terms, (engineers please forgive me for this simplification) the first stick input to counter the dropping of the nose was delayed because the software sensed that the orbiter was going too fast for such a command to be executed. Then when the second input was made the software added it to the first command and then that total was transmitted to the control surface which responded by commanding the total movement to the aerodynamic control surfaces. Lousma had nothing to do with this process other than making intuitive corrections. Had he done nothing, the nose gear would have hit the runway at 220 knots and may very well have been damaged or sheared off.

Of course to the uninformed observer, such as most reporters in the TV news media and some present-day Internet "experts," it appeared as if Lousma had botched the landing. In one good example of this misconception CBS news’ reporter Terry Drinkwater hyperbolized on the evening news that day by reporting that this was;

"The Shuttle’s least perfect landing." He then went on to further to mindlessly exaggerate; "The landing gear is programmed to come down when the spacecraft slows to 311 miles per hour, (270 knots,) but when the speed finally dropped to that, the COLUMBIA was extremely low. There were only 5 seconds between wheels down and touchdown. Close! Next, as the nose seemed to be gently settling, suddenly it lifted again. Then apparent control, but the force of the forward speed and the weight on the nose gear was close to its tolerance." He added that this was,"...likely caused by of a gust of wind or more likely a computer error, or pilot mistake."

Frankly, the only parts of that statement that were correct was the gear speed and the term “computer error.”

Thus began the myth of the "wheelie landing."

Some people then and now picture Jack Lousma in a state of embarrassment immediately after the landing of STS-3. In fact, quite the opposite is true. He was happy and excited and somewhat tickled that on this test flight, during the entry, approach and landing, the crew had uncovered a series of flaws in the auto-land system as well as the impact of those flaws on the software for the fly-by-wire system. Those problems could now be corrected so that future Shuttle pilots would not experience the same problems. That was the purpose of his flight: to test. It is also worth denoting the fact that on the previous two flights, as well as all of the ALT flights, the crews had only tested the auto-land for very brief periods of flight, and no one prior to STS-3 had tested it all the way down to the IGS, let alone exercised it as had been done by the STS-3 crew. This was flight test at its best and the results improved future missions.

Yet, even as of this writing, more than three decades after STS-3, you can look on YouTube and find videos of the “wheelie landing.” And if you have a strong stomach, you can read the moronic comments about it left by people whose total flight experience extends no farther than their computer’s keyboard, and whose research into the event goes no farther than repeating the quips that others have posted.
The same is sadly true of most Internet spaceflight forums and their self-certified Shuttle “experts.” 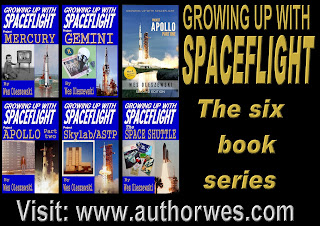