The following is an excerpt from my book "Growing up with Spaceflight; Space Shuttle" and is protected by copyright 2015 Wes Oleszewski. This text may not be reproduced in any form, either in whole or in part. 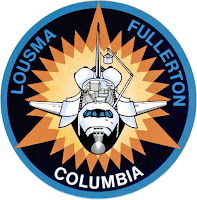 Personally, I had the great fortune to witness the first two Shuttle launches from two different perspectives: STS-1 from the banks of the Indian River and STS-2 from the VIP site. For the launch of STS-3, I was lucky enough to have my parents and younger brother visiting Florida during the event. Venturing down from Michigan in my Dad’s second-hand motor home, they were seeking to relieve me of my normal working-your-way-through-college diet of Rice-a-roni and peanut butter for at least a week. As a bonus, they had scheduled their visit during the launch of COLUMBIA and we were going to head down and see it as soon as I got off of work.

Freed from my service in the living hell that was the Daytona Kmart’s garden shop at 4:00 pm sharp on March 21, 1982, I left the loading of pine bark nuggets and cow manure to someone else and boarded the family motor home. We set out for the Space Coast. The folks wanted to take the scenic route down US1, and so southbound we rattled toward Titusville.

Along the way my Dad turned to me and asked, “So, where are ya’ gonna have us park this beast?”

“I’ll let ya’ know when I see it,” I simply shrugged and replied.

What I knew, but my Dad was not aware of, was that on a launch day, almost any place within 25 miles of the Kennedy Space Center becomes a public campground.

Just after US1 turned into the town of Titusville, a vacant piece of open ground caught my eye near the river south of the intersection of the highway and Max Brewer Parkway.

“Right there!” I exclaimed, pointing at the open lot. “Just pull in right there!”

Dad reluctantly pulled the land boat onto the open dirt lot. As we came to a stop it was clear that there were already several campers staked out there. Stepping out of the motor home I did my best Jake Blues arriving at the “Country Bunker” impression.

Dad was not at all convinced.

“What if they come and run us otta here?” he asked doubtfully.

“Don’t worry,” I assured him, “on the night before a launch ‘they’ don’t exist.” 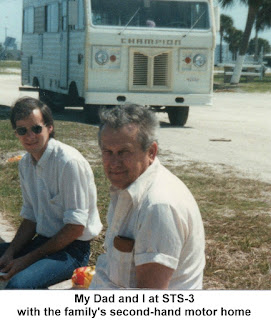 Dad worried most of the evening. People from the Midwest are very uncomfortable about invading other folk’s property without an invitation or a paid camping spot. But as the evening wore on and the once open lot became packed with campers, my Dad turned off his mid-Michigan worry switch and started to relax like the rest of us.

Our little camping spot was exactly 12.2 miles due west of Launch Complex 39A. As the sun set, the spotlights on the pad turned the waiting Space Shuttle rightfully into the center of attention. My Mom was absolutely transfixed by the Shuttle illuminated at the pad and simply could not take her attention away from it. She was not alone, as most of the campers there also were first-timers to a space launch. On the other hand, I was kept busy monitoring news reports on launch status as best I could, mainly by way of local AM radio. Unlike STS-1, this time there were plenty of TVs and radios to be found in the area. Much like STS-1, however, very few in the crowd understood the details of the countdown and the massive amount of glitches that could trigger a scrub. For the first time it dawned on me that I sort of wished I was one of those people who did not know how many things could go wrong and delay the launch. It was a feeling I would re-live three decades and 122 Shuttles later during STS-125.

Of course Mom took the liberty of telling nearby campers that her son, ya’ know, the guy in the aviator sunglasses standing down there by the river talking to a crowd about the spaceflight, knew all about the Shuttle- because he was a pilot studying Aeronautical Science. Of course that little boast got out among the retired folks camped nearby and morphed into, “That guy is an astronaut.” Try convincing a crowd of old folks that you are NOT an astronaut. Explaining that you are working your way through college, you only have 200 flight hours in little Cessnas. That you don’t work for NASA, you work for Kmart. It should be easy, but it ain’t; one old lady wanted me to pet her dog, then she said now she could tell the people back home that fluffy was petted by an astronaut! Finally, I decided it would be best if I just spent the evening in the motor home and let the rumor mill die out. Mom just said she didn’t know where they got that idea. Ugh.

Following 70 days in the Orbiter Processing Facility after STS-2, COLUMBIA had been mated to the External Tank (ET) in the VAB on February 3, 1982, and rolled out to Pad 39A just 13 days later. STS-3 was the first Shuttle stack to have the now well-known “orange” ET. Even after the ETs were in production, NASA was engaged in the process of weight scrubbing. After some extensive testing, it was decided that the ET’s spray-on CPR-488 foam insulation was strong enough to tolerate the heating of the high-speed airflow during the ascent. For that reason, the white-colored Fire Retardant Latex (FRL) that was used as an overcoat on the tank was deleted on later tanks following STS-2, the first of which flew on STS-3. Deletion of the FRL not only saved a small amount of money and man-hours in production, but also saved 595 pounds of weight. Oddly, when a new ET was rolled out of assembly with its fresh CPR-488 coat on, it was not orange, but rather was a greenish yellow color. Solar ultraviolet rays caused the foam to turn orange over time and as it was exposed to more and more sunlight it turned an orangish brown in color – a Space Shuttle suntan. Doing some launch day announcing for ABC News, astronaut Gene Cernan speculated that they may later mix a white pigment with the CPR-488 to make the tank white again. Yet that never happened, but that thought illustrates just how odd that orange tank appeared when stacked as a spaceflight booster in the 1982 era.

Sporting its orange ET, the countdown for STS-3 was normal up until very late on the night before the launch. A malfunction on a nitrogen gas line in some ground support equipment delayed fueling operations for a short time and it looked like a bad glitch to those of us on the outside. Just before dawn, however, NASA PAO announced that the delay would be just one hour in length. Oddly, at our little campsite, rumors spread saying everything from “Pack it up and go home” to “Problem? There’s no problem.” At the time, I found it was best to just stay glued to the AM radio and avoid the other campers. 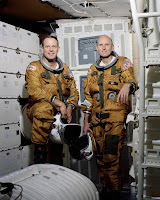 Following a one-hour delay, COLUMBIA’s crew, Commander (CDR) Jack Lousma and Pilot (PLT) Gordon Fullerton went aboard and were strapped in. Originally, Lousma had been selected as the PLT for STS-3 and went into training with Fred Haise who had been CDR of the Shuttle ENTERPRISE while conducting the Approach and Landing Tests back in 1977. Their STS-3 mission was scheduled to be the rescue of Skylab, which was why Lousma, a former Skylab astronaut, was selected for it. However, the best laid plans of NASA soon began to fall apart as the Shuttle’s development began to experience delays and the sun’s activity began to grow. The development schedule pushed STS-3 back by nearly two years and the increased solar activity caused the Earth’s atmosphere to swell. The result was that the atmospheric influence on Skylab caused its orbit to decay at a far greater rate than expected. Skylab was going to reenter sooner than planned. For that reason the STS-3 crew of Haise and Lousma was moved up to STS-2. The schedule of Shuttle development, however, soon pushed completely beyond the date of Skylab’s reentry. The crew was returned to STS-3 and the Skylab rescue mission was canceled. Eventually opportunities motivated Fred Haise to retire from NASA and Jack Lousma was moved into the CDR seat of STS-3 and given Gordon Fullerton as his PLT. Fullerton had actually been Fred Haise’s PLT in the Approach and Landing Test missions aboard the ENTERPRISE and he also had composed many of the checklists and procedures now being used on the Shuttle. Now he would take that experience and make his first trip into space.

At 11:00:00 a.m. Eastern Time, the bolts blew, the SRBs ignited and the STS-3 stack lifted off. The burst of sun-bright flame and billows of smoke and steam at Pad 39A set off cheers and screams from every direction around KSC. About 17 seconds later, as the first-timers in our little campsite started to realize that they could not hear the Shuttle, it was then that COLUMBIA reached out for the third time, took hold of every soul and shook us to the point where we knew the true meaning of glory. Thrilled screams and cheers now reflexively burst from the crowd at a higher pitch. For a moment I could feel the ground actually shake. Looking down I saw a puddle nearby and its water was vibrating. I tapped my Mom on the shoulder and pointed down at the reverberating water. She glanced down, squealed with delight and went back to watching COLUMBIA climb. Dad was spell-bound and just kept saying,

There were broken cloud decks in the launch area, but from our location the launch was mostly un-obscured. Raining fire from her SRBs COLUMBIA climbed with the determination of a homesick angle. This time, instead of my family watching me entranced by a space launch, I got the joy of standing back and watching all of them captivated by the wonder of America’s space program.

Following SRB separation the COLUMBIA once again became a bright star rapidly fading into the morning sky. In a phenomena that would accompany every Shuttle launch for the next three decades, the crowd of spectators broke into spontaneous applause that no one directly involved with the mission could hear. Straining their eyes toward the sky, many tried to watch the Shuttle’s departure for as long as humanly possible before turning away and heading home. I was guilty of that myself. Then I looked at my Dad and Mom and little brother.

“THAT,” I exclaimed proudly, “is what it’s all about.”

Mom wiped tears from her eyes, Dad gave that relieved laugh that he always used when he had no words for a given event and my younger brother simply kept saying words such as “Wow” and “Cool.” It was an experience that they would take home and share with their friends and relatives for decades to come. 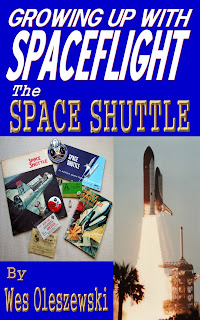 You can get your copy of the entire book, autographed and personalized at www.authorwes.com
Posted by Wes Oleszewski at 8:30 AM