Apollo 15- A half century ago today... Launch Day!

The following is an excerpt from Wes Oleszewski's book "Growing up with Spaceflight, Apollo Part Two" It is protected by copyright 2015 Wes Oleszewski, no part may be reused without the author's permission- publication here does not imply such permission. 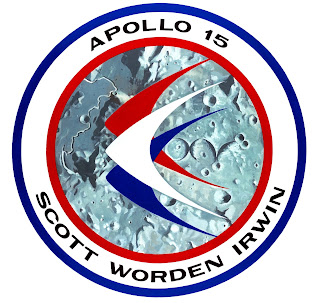 On March 10th, 1971, just one month after the conclusion of the Apollo 14 mission, a chartered C-130 aircraft delivered a very special package to NASA. Contained in the dark gray convex hexagon-shaped box was the most unique vehicle to be flown in space since the Lunar Module itself; the first flight-ready Lunar Roving Vehicle (LRV). This was an event that went unnoticed by the news media and unknown to those of us outside of NASA. It had been mentioned in passing during the Apollo 14 mission, but otherwise went completely overlooked by the general public.

Conceived in 1964, before anyone had set foot on the lunar surface, the idea of a roving vehicle languished at the Marshall Space Flight Center (MSFC) until April 7th 1969 when a Lunar Roving Task Team was formed there. When the word went out that NASA was seriously looking for a lunar rover, a number of companies came forward seeking a contract. In the end General Motors and Boeing ended up with the contract to design and build the LRV. Although the roving vehicles that had been suggested in years past were usually huge and heavy, the one that would be practical for an operational Apollo mission had to be small and lightweight. Additionally, in order to ride on the lunar module it needed to fit into a space that measured five feet tall, five feet wide and five feet deep. The problem thus became how do you build a car that can operate in a vacuum on a soft powdery surface a quarter of a million miles from the nearest gas station, have it weigh less than 500 pounds and fit into a triangular space that measured five feet in all three directions. The person who, for the most part, solved the problem was a Hungarian engineer from General Motors by the name of Ferenc Pavlics. His concept was for a lightweight flat chassis vehicle that folded up upon itself. This allowed the LRV to fit into the unused space of the LEM descent module’s Quadrant 1. Shortly after the first LRV was delivered to NASA, it was shipped to KSC and loaded into the Apollo 15 LEM. Lunar exploration was about to take on a whole new and exciting look. 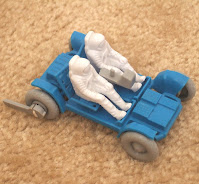 Some kids looked forward to Christmas, some kids looked forward to their birthday and some kids looked forward to the last day of school... I looked forward to every Apollo launch as if it were all of those rolled into one. So it was that on the morning of July 26th, 1971 I was in what had become my standard “Apollo-watchin’ position.” This may have been the standard position for tens of thousands of space-buffs around the country; sitting cross-legged about 18 inches away from the picture tube of our family TV, glued to Walter Cronkite. It was launch day for Apollo 15 and even though I had recently turned 14 years of age, I had slept the night before like a little kid waiting for the sounds of Santa hitting my rooftop. Up before dawn and busily dialing between the three networks I went looking for any snip-it of information on the mission.

While most of the kids in our subdivision of Sheridan Park were deep into their normal mid-Michigan summer activities, namely swimming, biking and just plain hanging out, I had been distracted from all of that lately by the upcoming Apollo 15 mission. In fact the afternoon before the launch I had gone with some of my pals to the theater to see “The Andromeda Strain” and while the movie was terrific my mind was on Apollo 15. I had a special plan of attack for getting as much as I could out of the flight. For Apollo 14, I had hijacked my little sister’s new cassette tape recorder and recorded portions of the mission coverage off the TV onto two 30 minute tapes. Having played those over and over every day since the mission ended, I found that a total of 60 minutes of Apollo was simply not enough. Thus, for Apollo 15 I had purchased, with my last dollar, a three pack of cheap-O 60 minute cassettes. I was now so broke that my Mom actually had to give me the money to go to the movie the day before the launch! Still, I sat through the movie quietly planning exactly what parts of the Apollo 15 mission coverage I would capture on each cassette. Indeed in my teenage mind I had it planned out just like NASA planned the mission... well, almost. 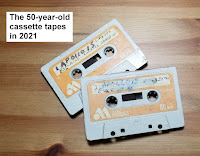 Late into the evening prior to launch-day I decided to do a flight readiness test of my recording equipment. Suddenly- A GLITCH! My, or rather- my sister’s, external microphone had failed! This was before they started putting built-in microphones on recorders- so I was really screwed. It was 9:45 at night- there wasn’t a store in the Saginaw Valley that was open- especially not one with a microphone. Worse yet, I had spent my last dime on the tapes! I scrambled for a solution. Wiggle the wires... no use. Tap on it- no good. Take it apart... now it’s REALLY busted! Sheridan Park- we have a problem!

Perhaps, I pondered, when the store opens at 9:00 in the morning, I could get there and, after negotiating some sort of a lawns-to-be-cut-later deal with my parents, I could buy a new microphone, and make it back home within the 26 minutes between the time the store opens and the launch takes place... okay... that was nuts. There was no way that was going to happen, just the negotiating the lawn-cutting part with my parents alone was on a par with negotiating with North Vietnam. I sat there looking at the disassembled microphone and I thought “What would Gene Kranz do?” Simple. He’d call a meeting of his engineers and controllers and he would tell them to go out and find a solution to the problem with what they had.”

It was then that the thought struck me that several months back I had accidentally stuck an earphone into the microphone jack and it fit; in those days both had 1/8 inch jacks. And an earphone had the same basic elements to it as the microphone that was now laying in pieces in front of me. I knew that because I had dissected plenty of earphones. In short order I was rooting through the family “junk drawers” and had scrounged up an earphone that I had not yet dissected.

I tested it in the microphone jack; IT WORKED! 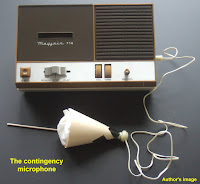 Sure, the sound had a lot of tin in it and some 60 Hz hum, but it recorded! Using a four inch by six inch railroad “pounding card” that Dad had brought home from work, some electrician's tape and a hand full of tissues I had a microphone that the boys in the backroom at Houston would be proud of.

I added a small measuring stick to give me the optimum distance from the TV speaker and I was “Go for the launch of Apollo 15!”

Posted by Wes Oleszewski at 8:27 PM