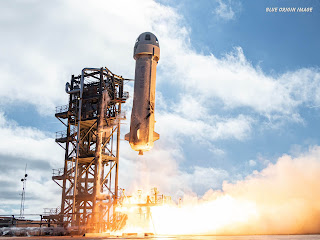 On July 20th, 2021 Blue Origin launched four humans on a sub-orbital flight to space and then returned them by parachute and their booster by way of a powered landing. It was a great event and got more media coverage that some previous Space Shuttle missions.
Then someone said Send In The Clowns and the cyber idiots and media meat puppets came calling.
It was an easy joke to make... and it was nothing new. In fact since the design of the New Shepard vehicle was first revealed it was quickly compared to Dr. Evil's phallus-shaped rocket from the movie "The Spy Who Shagged Me." It was comical then... but now it's as old as most internet spoofs. Yet the media exploded with it once more.
Oh, ha, ha, ha, now please further demonstrate how little you know about aerospace... and so they do... by the millions. From tweets to FaceBook Memes to posts in forums by people who hide behind usernames to news media meatpuppets on 24 hour cable channels, they came out in droves following the flight.
Why?
Well it's a common reaction of those who have essentially no knowledge of the actual engineering that went into the vehicle itself. So, making that sport of the flight is a good way for those whose level of aerospace knowing is far less than their ability to play video games on their phone. It makes them cyber cool while addressing an event of which they have only a superficial understanding. The same goes for the meat puppets who do the news casts. It fills some precious ratings minutes and offers an opportunity to take a shot at a billionaire like Bezos while at the same time not having to know the difference between hypersonic and hypergolic (Tucker Carlson would now have his staff look that one up.)

The cold had fact is that a large degree of complex engineering went into making this flight happen. There are a great deal of developmental steps forward that came into play. There are also many hazards that have been opened up along the way as well.
Steps forward range through the aerodynamics in the sub-sonic, trans-sonic and hypersonic fields of flight. Guidance and stabilization in those areas appear to have been honed to a very fine edge. The actual "look" of the vehicle is a factor of those areas of concern. Keep in mind that those regions are in play not only during the boost, but also during the return. One clever step was selecting a non-ballistic trajectory. It's a long-known mode that prevents the vehicle and it's passengers from being exposed to excessive G-loads on reentry. Likewise the booster has the return mode as much in its design as boost. But the heart of the flight is in the onboard avionics and computer systems as well as the light level of redundancy needed to make it look easy.
Yet, the one thing that, in my very humble opinion, I find to be an open door to hazard is the total dependence on autonomy. Yes, I know, computers and systems are now so advanced that it can handle every possible emergency... until the emergency pops up that the programmer never imagined. Sorry folks but I had it trained into me that you never trust that damned autopilot, because when you do, it'll take you to a smokin' hole in the ground. Yet, today we see more and more aircraft trusted to automation to a growing degree and the New Shepard is a far extension of that trust. I hear the argument, "well elevators used to have operators and many trains run by automation, why not aircraft and spacecraft?"  Elevators and trains have one huge difference from flight vehicles; they are both always in contact with the ground.
A pilot is a human circuit-breaker. We are the ones who, at the greatest degree, separate the vehicle from electronics and fly it. When you take us out of the loop and depend completely on the computer, well... garbage in, garbage out- and at hypersonic speeds and realm of space, it only takes one tiny bit of garbage and then it's a long tumble back to that smoking hole in the ground.
Instead of six passenger seats- the vehicle should have five passenger seats and one pilot's seat as well as an abort handle and a control handle.
I've always looked at flight of any sort by what I call my 50/50 rule... anytime you elevate the human animal above 50 feet or accelerate it beyond 50 knots, or both... you can kill it.
But hey, I'm old fashioned- thinking in the stone age... let's all just make some more Dr. Evil's rocket memes... right!
Posted by Wes Oleszewski at 11:19 AM