BE PREPARED FOR A ROLL-BACK 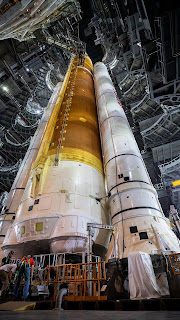 While everyone in the media is talking about the LH2 (Liquid Hydrogen) leak in the Space Launch System’s quick release connector, one small detail is somewhat overlooked.

When the current lunar launch window closes on Tuesday September 6, 2022, the certification date for the batteries in the vehicle command destruct system also expires. There is no way to re-certify the system at Launch Complex 39B because there is no access arm to that area of the booster. The only way to re-certify the system is by way of the access platforms in the VAB.

Thus, conjecture as to if or not the engineers need to construct some sort of weather shelter in order to service that leaky quick-disconnect in order to repair the LH2 leak at the launch pad is mooted unless they can get it all done and launch before the command destruct system expires.

Although the VAB provides plenty of shelter from Florida’s weather, the downside to a roll-back and repair indoors is that once the repair is finished there is no way to completely test the fix. The only way to test that fitting is to roll the vehicle all the way back out to Pad 39B where the LH2 can be fed into the system.

Additionally, although it has been discovered that the August 29 scrub caused by readings that one of the core stage’s RS25 engines was not being properly chilled was caused by a faulty sensor- it is important to point out that the KSC weather rules went red 16 minutes before the launch window opened. The weather continued in the red through most of the launch window. So, faulty sensor or not, the launch was scrubbed for weather before it ever got started.