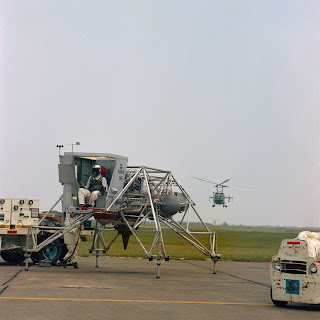 Armstrong in the LLTV

With the coming 50th anniversary of the Apollo 17 mission it's important to note that the final flight of the Lunar Landing Training Vehicle (LLTV) took place on December 13, 1972. The pilot was Gene Cernan.

I've seen TV documentaries that love to express how dangerous the LLTV aircraft were. Several talked about how the astronauts "hated it." Another said that it was so hazardous that NASA cancelled its use.

In fact I've talked to several Apollo moon-walkers who, when asked, said that this was a very useful training device. The proof of that is the fact that the LLTV was in use right up until the final Apollo lunar mission.

Posted by Wes Oleszewski at 3:45 PM