A STORY OF VANISHING STRIPES

Often I see space-buffs on the internet wondering about the paint scheme on the Saturn V's S-IC first stage. The questions surround the roll pattern on the stage's intertank. 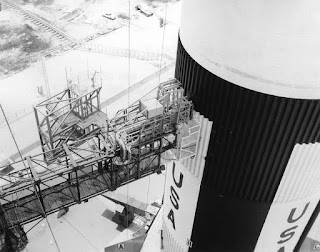 When Vehicle 500F, the facilities check-out article was rolled out to Pad 39A on May 24th 1966 the intertank section of the S-IC was adorned with large black stripes and black upper band. This was the original roll pattern planned for all of the vehicles. 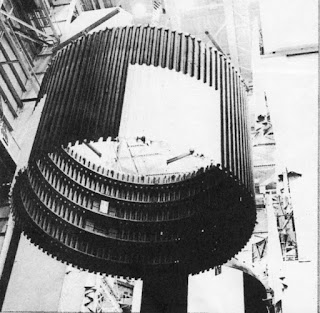 It is important to keep in mind that the sections of the Saturn V were constructed individually and fully painted before being assembled as a complete stage. This was done because each section and component had to be weighed and balanced so that the final exact weight and center of gravity of the entire launch vehicle could be accurately known. The surface area of a complete Saturn V is huge and paint has significant weight. If you don't believe that- go to the hardware store and grab two 1 gallon paint cans in each hand and pick them up.

Lots of cool information such as this can be found in Wes' "Growing up with Spaceflight" six book series. A good place to start if you're an Apollo fan is right here with APOLLO PART ONE. Check it out today!
So it was that vehicles S-IC-D through S-IC-5 (Apollo 10) all came off of the assembly line with the black striped intertank.

After 500F was rolled back to the VAB a strange thing happened to future Saturn V launch vehicles... the intertank black striping vanished! For many years I wondered, like other space-buffs, why it was gone? I found the answer in the April, 1968 issue of "Space World" magazine and an article written by Milton Alberstadt titled "The Saturn 5 gets a New paint job." 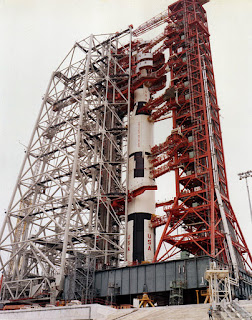 When 500F was on the pad doing the facilities check the Florida sun added an unexpected problem to the rush to put men on the moon before the end of the decade. The black surface area was soaking up the sun's heat. Inside the structure the space between the RP-1 tank and the LOX tank got so hot that it was throwing off readings from strain gauges. It was probably also making it hell for the pad rats to work in that area as well. So NASA decided to paint white over the already produced interstages to reflect the Florida sun. Some of the vehicles that had already been delivered to KSC were repainted in the VAB while others were repainted at the Michoud assembly facility. 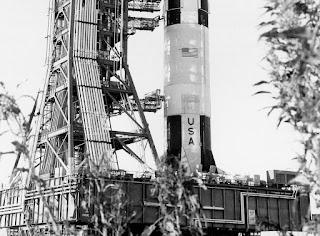 Looking closely at the S-IC for Apollos 4 and 6 you can easily see the repainting.

Wanna know more cool stuff like this? Check out my new book series "Growing up with Spaceflight" on Amazon and Kindle!