On May 14, 1973 Skylab 1 was launched and later was found to have been damaged during the ascent. At the time, no one at NASA knew exactly what had happened and information showly trickled in as data from the workshop's first orbit began to be analyzed, but the full story of what happened would not be made public until August. The result was that NASA fed the media bits and pieces primarily blaming Max-Q. The media fed that to the public and like good parrots the news outlets repeated the story over and over. By the time the full story was published by MSFC three months later, the media had completely lost interest in what really had taken place and the public was left with the earlier reports. Many folks, even today, hold those as fact. Often I see this subject come up on the Internet and many folks, some of whom profess to know what they are talking about, simply have no clue as to what actually happened. I actually saw a post by a person, who I thought to be an actual expert on Saturn vehicles, that stated that the Ares I vehicles "...would suffer from the same sort of vibration that almost destroyed Skylab..." Apparently he had never read the post launch report from NASA's MSFC on the 63 second anomaly, the story of which is far more interesting. Here is the actual story taken from official MSFC reports and not TV "documentaries" produced by people who know nothing about spaceflight, or semi informed internet jabber.
It's way more fun for anyone remembering Skylab 1.

The following is an excerpt from "Skylab- ASTP" volume of "Growing up with Spaceflight" copyright 2014, Wes Oleszewski all rights reserved- no reproduction permitted. 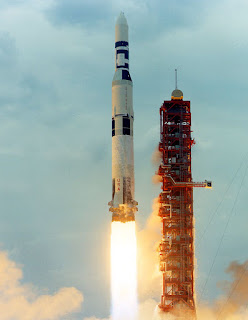 THEY ALMOST LOST THE WHOLE DAMN VEHICLE
Just 49 seconds after liftoff, Skylab 1 was swallowed by a thick layer of clouds that blocked out any view from the ground. That was unfortunate because big problems were just seconds away. 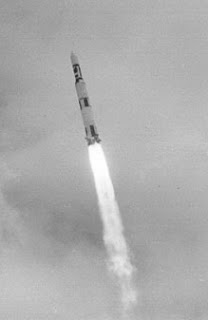 Shortly after vanishing from sight, an “anomaly” occurred aboard the Saturn V that put the entire Skylab program in jeopardy. The events began about 63 seconds after liftoff. This anomaly can be found described in historical shorthand by both NASA publications and media presentations as being the moment when the workshop’s micro-meteoroid shield prematurely deployed, was caught by the slipstream, and torn off the Skylab.
The overall results were workshop overheating and a jammed solar panel wing. The second solar panel wing had been lost off the workshop completely. Although most accounts of the launch and the Skylab program normally leave it at that; a study of the overlooked details of the 63 second anomaly is far more interesting and far more frightening. AS-513, in fact, came within seconds of becoming the first Saturn V to be lost in flight.
At 62.807 seconds after liftoff the launch vehicle began to react to an external, abnormal aerodynamic force. This was 1.707 seconds after Mach 1 (the sound barrier) was passed and was the beginning of the anomaly that was the premature deployment and subsequent loss of the workshop’s micro meteoroid shield. 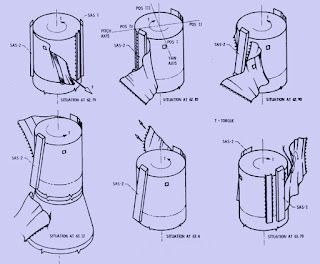 Most media and poorly researched accounts say that the event took place at “…the point of maximum vibration…” or they will also say it happened at “Max-Q,” or the point where the vehicle experiences maximum aerodynamic pressure. But, Max-Q was a full 10.63 seconds into the future and the meteoroid shield would be long gone by then. What really happened was that as the Mach 1 shock wave passed down the vehicle a reverse flow of air along the skin of the vehicle found its way up what was called the Auxiliary Tunnel (a conduit that ran the length of the workshop). Entering through two uncapped stringers at the base of the tunnel, the high pressure air moved up the tunnel and popped the rubber boot at the top. The airflow then got up under the shield structure and propagated a bulge that was just enough to lift the shield more than 2 inches into the slipstream, which was now at Mach 1.05. By 63.289 seconds into the flight, less than one second after it had started, the damage was done and the shield had torn away and its departure loosened both Solar Array Assembly (“SAS”) wings as it went. The worst of the damage, however, was not done yet. 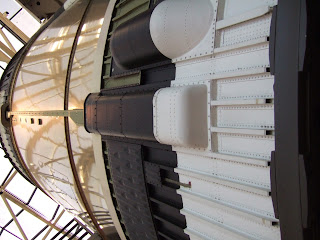 As the two-and-a-half story tall, 22-foot-long hunk of meteoroid shield fell, it struck the Saturn V at least twice. The first impact was on the S-IVB to S-II adapter, where the debris punched a hole in the adapter’s skin. This showed up in post flight data as the pressure in the adapter area was shown to drop at an abnormal rate. The potentially fatal blow, however, came when the shield’s remains struck the Saturn V for the second time. The impact area included the second plane separation point where the linear shaped charge was located that pyrotechnically blows the parts of the airframe apart so that the “skirt” ring can be dropped after first stage separation. This “skirt sep” often seen in videos, normally took place about 30 seconds after first stage separation. It is a critical event and, in manned Apollo flights, if the skirt failed to separate from the S-II, it was an abort situation requiring use of the escape tower.

The reason why this “skirt sep” is so critical is not one of weight, but rather it is thermal in nature. A back-flow of hot gasses from the five J-2 engines would become trapped in the confines of the skirt and the issue would become critical at center engine cut off. With the four outboard engines still firing in the near vacuum of space, and no center engine to provide its flow, the back-flow of heat would intensify. The temperatures imposed on the base of the stage along the thrust structure would quickly spike and go into the range where a “thermally induced failure” of the stage would take place. In that scenario the thrust structure melts and the burning engines push up into the LOX tank. On AS-513, that is what began to take place and the vehicle was within seconds of failure when S-II’s outboard engines finally shutdown. Had there been the loss of one engine, and the stage had been forced to burn a bit longer to compensate, they would have lost the entire vehicle. Even with the S-II engines burning normally, the estimates are that the Skylab 1 vehicle came within a very few seconds of that disaster.
So, why did the skirt fail to separate and, worse yet, why did the ground controllers not get an indication of failed separation?
Here is why: When the separation signal was sent by the Saturn V’s Instrument Unit (IU), two Exploding Bridge Wire units would fire at opposite ends of the Linear Shaped Charge (LSC) loop that passed completely around the vehicle at the separation plane. The LSC would then blow apart 199 tension straps holding the two sections together, and the skirt would thus be freed to drop away from the S-II stage. A back-up charge would fire if an electrical plug between the two sections did not disconnect, indicating that the two sections were less than ¼ inch apart. On AS-513, the meteoroid shield impacted the seam where the LSC for the skirt was located and it broke the loop. When the LSC fired, the explosion only propagated 165 degrees around the separation plane (about 89 tension straps). But that was enough to pull out the electrical plug used to indicate a separation of more than ¼ inch, so no back-up charge firing was commanded and the signal sent to the ground said that separation had taken place when in fact it had not. Because of the cloud cover, no ground cameras could be used to back up the faulty telemetry, so no one in Mission Control knew that the skirt was still attached. It was calculated that the huge meteoroid shield impacted the S-II skirt at between 200 and 1,000 feet per second. It was a close one; they almost lost the whole damned vehicle.
A second anomaly, which also is often misreported, involved the loss of SAS wing number 2. Most accounts say that it was lost with the meteoroid shield, but in fact it was not! Although loosened by the shield’s departure, SAS wings number 1 and 2 stayed connected to the work shop all the way up. At S-II shutdown, however, four solid fuel retro rockets mounted at 90 degree intervals around S-IVB / S-II forward adapter skirt fired to aid in separation of the S-II from the upper stage. SAS wing number 2 was centered just 16.8 degrees off of one of the retro rockets. The plume from that retro’s firing hit the already loose SAS wing and blew it “…completely off the bird,” as Pete Conrad later observed. SAS wing number 1 was held down by debris from the meteoroid shield which was enough to hold it against its associated retro’s plume. 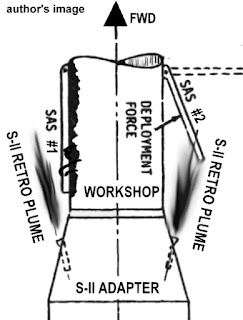 Although you may see the anomaly sequences misreported in “documentaries” and even in some NASA films, the facts are as stated here. It simply shows that accounts of spaceflight history are normally written by persons too lazy to dig into the post-flight analysis. It also is important to keep in mind that normally NASA films are produced by outside contractors who know little or nothing about the subject, yet were able to make the lowest bid in order to get the project.

Author's Note: Upon reading this, Tom Faber posted the following beyond cool first-hand story, "I knew that the lost solar panel stayed attached until Skylab reached orbit because I saw it that evening (but didn't know what it was at the time). The evening of the launch the local Atlanta TV news reported that Skylab would be visible that evening and gave the time and direction to look. I went out shortly before the appointed time and soon I saw a bright object going NW to SE. Then there were 2 more! Then another 2. Then a 6th object and a 7th! I later found out that in addition to the Skylab itself the others were the 4 sections of the payload shroud, the lost solar panel, and the S-II. It was quite a show! 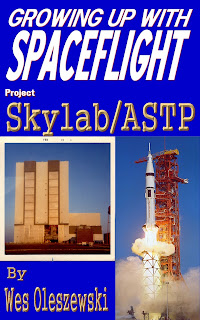 Find these and more fun details about Skylab and ASTP in my Skylab/ASTP volume of "Growing up with Spaceflight." It is available right now!

Growing up with Spaceflight- Skylab/ASTP 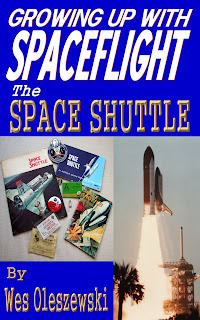 While you're at it don't miss out on the Space Shuttle volume... read about landing a Cessna 172 "Chickenhawk" on the shuttle runway at KSC and see what it was like to watch the very first Space Shuttle launch! This is your chance to be among the Million plus folks camped out on the riverbank that morning in April of 1981.
Growing up with Spaceflight- Space Shuttle

Posted by Wes Oleszewski at 4:58 AM